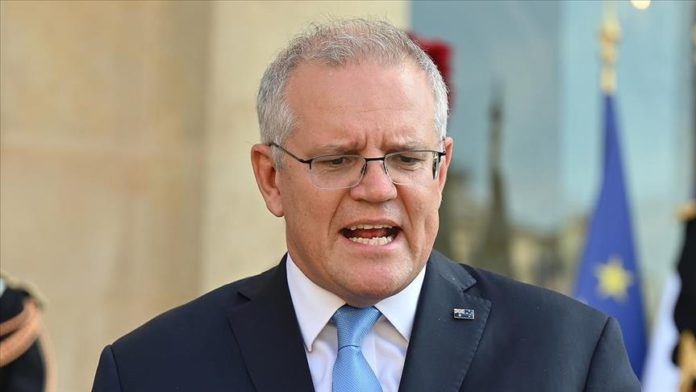 The Australian prime minister on Tuesday slammed China over its support to Russia in the ongoing Ukraine crisis, terming it “very concerning.”

“I’ve got to say one thing that does disappoint me is that like-minded countries – Australia, France, everyone – have been very clear in their denunciation of what Russia is doing but there’s one country that’s not doing it … and that [is the] Chinese Government,” Scott Morrison said in an interview to Australian radio station 2SM.

He said China is not denouncing Russia’s act of “threatening terrible violence on Ukraine,” and warned that the crisis would have a real impact on the global economy and oil prices, and “everyone will feel it.”

“When you have a large country in our own region that suggests that they want peace and harmony, but yet are not prepared to call out the actions of an autocratic state that wants to violate the territorial sovereignty of their neighbor, then that is very concerning,” he said.

Russia is now accused to have amassed thousands of troops near Ukraine, prompting fears that it could be planning another military offensive against its former Soviet neighbor.

Moscow has denied it is planning an attack, and said its troops are there for exercises.

The Defense Ministry said on Tuesday some of its troops are returning to their bases as combat training missions “are coming to an end.” But a large-scale Russian-Belarusian military drill will last until Feb. 20.

The Kremlin also issued a list of security demands to the West, including a rollback of troop deployments from some ex-Soviet states, and guarantees that Ukraine would not join NATO.

Beijing, however, agreed with Moscow that the US-led NATO military alliance should not admit new members.

They issued a statement showcasing their agreement on a number of issues during a visit by Russian President Vladimir Putin for the Winter Olympics.

Australia’s relations with China have deteriorated over trade tensions and Canberra’s call for a probe into the origins of COVID-19, which first appeared in Wuhan in December 2019, among other issues.