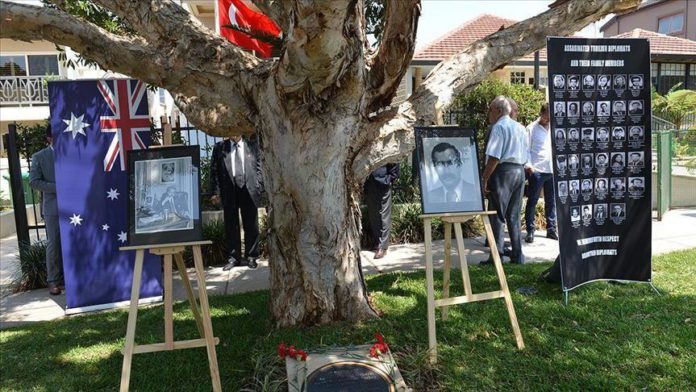 Australian police have found new leads in an investigation into the death of a Turkish diplomat and his colleague, local media reported Thursday.

Police in New South Wales (NSW) state on the east coast of Australia deployed divers to search the floor of the Sydney Harbor to investigate the murder of Turkish diplomat Sarik Ariyak, who was assassinated along with his bodyguard in Sydney’s eastern suburbs in 1980.

“After a formal review by the NSW Joint Counter Terrorism Team, police divers conducted searches off Greenwich Point regarding items of interest to the investigation,” ABC News reported.

Some items were recovered during the dive, police said.

While Ariyak was martyred at the scene, Sever later succumbed to his wounds at the hospital.

The two Turkish officials were leaving the Portland Street residence in separate vehicles. The yet-to-be-identified Armenian terrorists approached them and fired several shots from close range before fleeing on a motorcycle.

“It’s like a jigsaw puzzle with frayed edges. We’re trying to put it together and every piece of information that we have brought to us actually helps us put it all together,” NSW Police Counter Terrorism Commander Mark Walton told reporters on Thursday, according to the Canberra Times.

Turkey last December welcomed Australia’s move to reopen the investigation into the assassination of its officials.

It lauded Australia for announcing a 1 million Australian dollar ($716,600) reward for the capture of the perpetrators of the terror attack on the occasion of the 39th anniversary of the officials’ death.

In a statement released on Dec. 18, 2019, Turkey’s Foreign Ministry said 58 Turkish nationals, including 31 diplomats and their family members, lost their lives since 1973 as a result of terrorist attacks perpetrated by Armenian terrorist groups known as ASALA, JCAG and ARA.

“If we look at the history of over 30 similar acts that occurred around the world over that period during the ’70s and ’80s […] this was consistent with that and the motive is clearly connected,” Walton said. “It’s reasonable to expect that the same people would be connected between those two crimes, as they are likely to be with many of the crimes that occurred overseas during that period.”

The vast majority of attacks were conducted by ASALA and JCAG. ASALA, founded in 1975, was the first Armenian terrorist group to wage war against Turkey.

It not only targeted Turkey but also other countries and became infamous for a 1975 bomb attack on the Beirut office of the World Council of Churches.

The JCAG was formed in 1975 in Beirut. However, it is nationalistic, not Marxist-Leninist like ASALA.

Claiming that it only received support from the Armenia diaspora rather than other foreign partners, JCAG only targeted Turkey because it believed that attacking other countries would damage the so-called “Armenian struggle.”

It initially gained notoriety by claiming responsibility with ASALA for a 1975 attack on Danis Tunaligil, Turkey’s ambassador in Vienna.