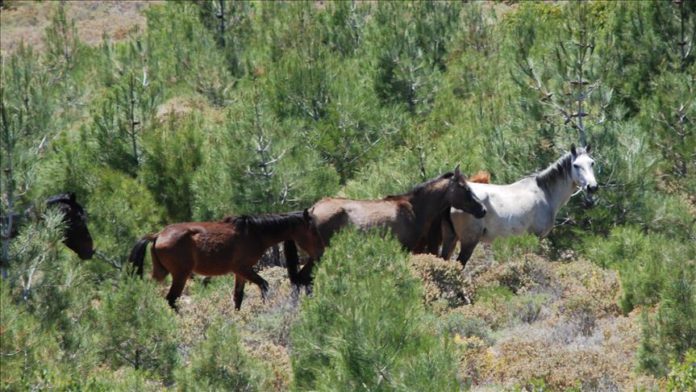 The population of wild horses in Australia is increasing by 23% every year and successive favorable seasons would see the population double about every four years, according to a report released on Tuesday.

The country has an estimated 400,000 feral horses, the world’s largest wild population, said the report by Australia’s Invasive Species Council.

The term feral refers to animal or plant species that exist in a natural state and are not domesticated or cultivated.

“Over time, horse density, range and damage will escalate, making future control more difficult and expensive,” the report warned, referring to the damage inflicted on alpine and sub-alpine plants by the horses.

The boom in feral horse population comes at a time when wildfires have destroyed at least 10 million hectares of land – equal in size to several European countries – across Australia since December 2019, according to a report by FOUR PAWS International.

The bushfires across several Australian states in 2019 and 2020 have claimed the lives of over a billion vulnerable wild animals, including hundreds of thousands of farmed animals, the report said.

Growth in feral horse population has been witnessed across the Australian Alps, in Kosciuszko National Park, parts of Queensland, the Northern Territory, and Western Australia.

At least 690,000 hectares of the Kosciuszko National Park were severely damaged by the bushfires but it did not affect the horse population, according to the report.

“Given the damage to Kosciuszko National Park and its native wildlife and the recent years without removing any feral horses, there are now higher grazing levels of more feral horses on smaller productive areas,” she said.

“There is now an extremely compelling case for accelerated feral horse removal.”

“Every credible piece of scientific evidence points to increasing damage to this sensitive habitat caused by feral horses,” she said.

According to the Invasive Species Council report, aerial culling “is the most effective humane solution for removing large numbers of horses … provided it is undertaken under strict animal welfare protocols.”

“An effective control program brings animal welfare benefits that should not be ignored. There will be more suffering in the future when much larger numbers of feral horses have to be killed and when they starve because of over-population,” the report said.

Earlier this year, Australia culled more than 5,000 camels in what authorities called “urgent response to threats” posed by rising number of feral camels due to drought.