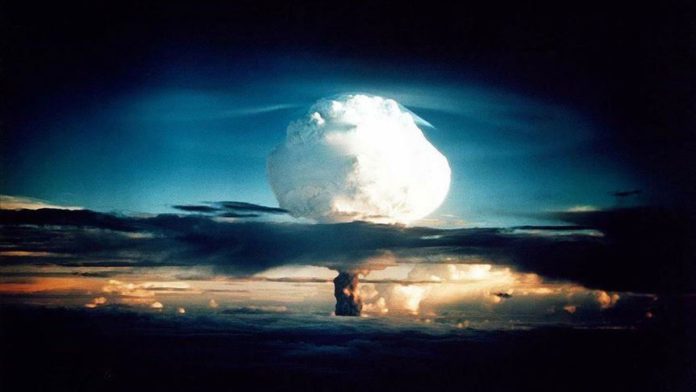 The explosive yield — the amount of energy released when a nuclear weapon detonates — has grown exponentially since 1945 when bombs flattened the Japanese cities of Hiroshima and Nagasaki.

Densely-populated megacities of the 21st century mean a nuclear attack could wreak even more horrific damage than inflicted on Japan, as signs point to the development of more sophisticated weaponry.

The first atomic bomb dropped 75 years ago leveled Hiroshima on Aug. 6, 1945, and killed an estimated 70,000 people instantly with many more dying in the following years from the effects of radiation.

“They have increased exponentially since 1945,” Shannon Kile, program director on the Nuclear Disarmament, Arms Control, and Non-proliferation program of the Stockholm International Peace Research Institute (SIPRI), said in an online interview with Anadolu Agency. “In the current US nuclear arsenal, for example, the W88 warheads deployed on Trident II submarine-launched missiles have an estimated yield of 475 kilotons, compared to the estimated 12-13 kiloton yield of the ‘Little Boy’ bomb dropped on Hiroshima.”

“The horror of a nuclear detonation may feel like distant history. Treaties to reduce nuclear arsenals and risks of proliferation are being abandoned, new types of nuclear weapons are being produced, and serious threats are being made,” said Peter Maurer, president of the International Committee of the Red Cross.

When the bombs were unleashed in 1945, the US was the only nation known to have fully developed the A-bomb.

At the start of 2020, nine countries — the US, Russia, UK, France, China, India, Pakistan, Israel and North Korea — possessed approximately 13,400 nuclear weapons, of which 3,720 were deployed with operational forces, SIPRI said in its 2020 yearbook. South Africa is the only country to have ceded its atomic weaponry.

Some 1,800 of those weapons are held in high operational alert, it said.

The nuclear threat stays in the global public consciousness due to recent tensions around UN non-security council nuclear states such as North Korea, Iran, Israel, India and Pakistan over Kashmir, as well as those between the big powers.

“The USA has disclosed important information about its stockpile and nuclear capabilities, but the Trump administration in 2019 stopped the practice of disclosing the size of its stockpile. The UK and France have also declared some information,” he said. “Russia refuses to publicly disclose the detailed breakdown of its forces counted under the New START Treaty, even though it shares the information with the USA.”

China publicly displays its nuclear forces more frequently than in the past, but it releases little information about force numbers or future development plans.

“The governments of India and Pakistan make statements about some of their missile tests but provide no information about their arsenals’ status or size,” he said. “North Korea has acknowledged conducting nuclear weapon and missile tests but provides no information about its nuclear weapon capabilities. Israel has a long-standing policy of not commenting on its nuclear arsenal.”

Overall, inventories of nuclear warheads, however, continue to decline, primarily due to the US and Russia dismantling retired warheads.

At the same time, the US and Russia have extensive and expensive programs to replace and modernize their nuclear warheads, missile and aircraft delivery systems and nuclear weapon production facilities, according to the institute.

“China is in the middle of a significant modernization and expansion of its nuclear arsenal, and India and Pakistan are also thought to be increasing the size of their arsenals,” the institute said.

North Korea continues to prioritize its military nuclear program as a central element of its national security strategy. However, in 2019 it adhered to its self-declared moratoria on nuclear weapons testing and long-range ballistic missile delivery systems.

The most powerful nuclear weapon in the current US arsenal is the B83 aircraft bomb, which has a maximum yield of 1.2 megatons (1,200 kilotons), said Kile.

“The destructive impact of modern thermonuclear weapons is difficult to calculate. This is because the explosive yield of the weapons may vary depending on the military role and mission,” he said.

“However, there is no doubt that the nuclear weapons currently deployed could have an incomparably greater destructive impact on cities than the two bombs were used against Hiroshima and Nagasaki in 1945,” he said.

Organizations monitoring or regulating information about nuclear weaponry engage in a constant battle with states to disclose fully, and in some cases, at all, as to what weapons they possess.

There is the Geneva-based Conference on Disarmament (CD), and the International Atomic Energy Agency (IAEA) in Vienna, among these organizations.

“The IAEA does not have a role in monitoring nuclear weapons and arsenals. Its inspection activities are limited to verifying declared holdings of civil fissile materials and production facilities,” said Kile.

He even felt that the coronavirus pandemic had stalled engagement and negotiations in diplomatic forums such as the CD.

“The five-yearly Non-proliferation Treaty (NPT) Review Conference, scheduled for April-May 2020, has been delayed until early 2021 because of the pandemic,” he said.

Kile said the CD has no role in monitoring global nuclear arsenals, although some member-states do this independently.

The head of the Weapons of Mass Destruction program for the UN Institute for Disarmament Research (UNIDR), John Borrie, made a similar observation about the strength of modern nuclear weapons and believes the CD’s 65 members have hampered its ability to negotiate.

“Overall, nuclear weapons today are much more sophisticated and flexible than those in 1945. But an important variable not to be forgotten is that of the vulnerability of the target,” Borrie told Anadolu Agency.

“There is some evidence that in today’s much more interconnected world, the use of a single nuclear weapon in a highly-populated area could cause global disruption far beyond the direct death and injury it causes,” he said.

CD states have been unable to agree on a schedule for a working formula by consensus since 1998 and for negotiations to resume fissile material curbs or begin other core topics such as nuclear disarmament, prevent an arms race in outer space or negative security assurances.

“The CD is currently the only dedicated forum to negotiate and establish agreements regulating weapons. It is not working. But if it collapses, it is difficult to see an alternative body being established to perform this function,” Borrie said.

June 8, 2020
We use cookies to ensure that we give you the best experience on our website. If you continue to use this site we will assume that you are happy with it.Ok