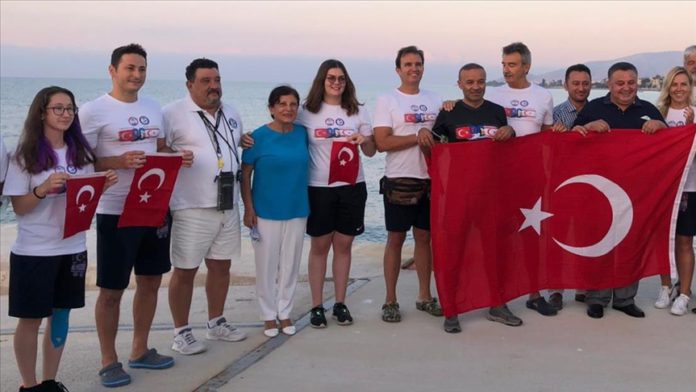 Tuzmen and the swimmers were handed the Turkish flag at Anamur Pier for the event, which was held for the second time this year.

He told reporters that if weather conditions are good, they will reach the shore on July 20, adding the flag they are carrying shows their support for the people of the TRNC.

Following his speech, Tuzmen jumped into the sea and began swimming.

Details of the event

The participants will deliver the Turkish flag to TRNC Coast Guard officials on July 20, which marks the 47th anniversary of the Cyprus Peace Operation.

The health status of the swimmers will be monitored by a medical team on a boat in the 90-kilometer (56-mile) track, with referees of the Turkish Swimming Federation following as observers.

The event will also draw attention to the embargoes that the TRNC is exposed to in international sports games.

Every year, the TRNC celebrates July 20 as Peace and Freedom Day to mark the operation – a large-scale military intervention to protect Turkish Cypriots from violence that struck the island in 1974.

​​​​​​​The island has seen an on-and-off peace process in recent years, including a failed 2017 initiative in Switzerland under the auspices of guarantor countries Turkey, Greece and the UK.

The Greek Cypriot administration entered the European Union in 2004, the same year that Greek Cypriots thwarted a UN plan to end the decades-long dispute.