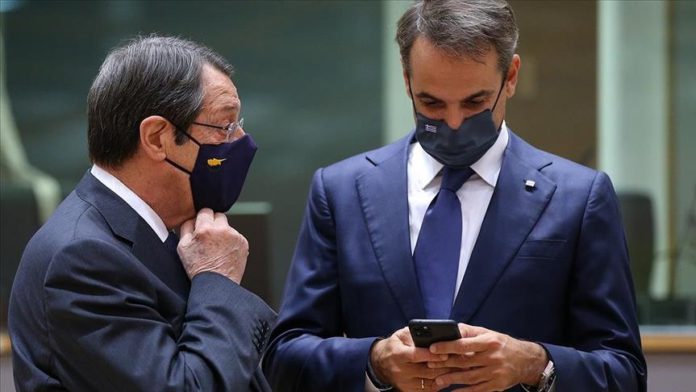 In a meeting on Monday, Greece and the Greek Cypriot administration continued to press for a federation solution for the island, though it has yielded nothing in a half-century of efforts.

In a joint statement following a meeting in Southern Cyprus, Greek Prime Minister Kyriakos Mitsotakis and Greek Cypriot administration leader Nicos Anastasiades reiterated their desire to participate in an informal 5+1 meeting on Cyprus – with the two sides on the island, the guarantor countries, and the UN – but refused to discuss any solution on Cyprus not based a bi-communal, bi-zonal federation.

Mitsotakis underlined Greece’s top priority in Cyprus is finding a functional solution which can be accepted by the two sides of the island, and argued that the Turkish side’s insistence on a two-state solution is rejected by the European Union.

Anastasiades stated that reunification of the island should include the end of the “outdated” guarantor system and the withdrawal of Turkey’s troops from Cyprus, deployed there to protect Turkish Cypriots from ethnic violence.

While Greece and the Greek Cypriot administration support a federation on Cyprus, Turkey and Turkish Republic of Northern Cyprus (TRNC) insist on a two-state solution reflecting the realities on the island.