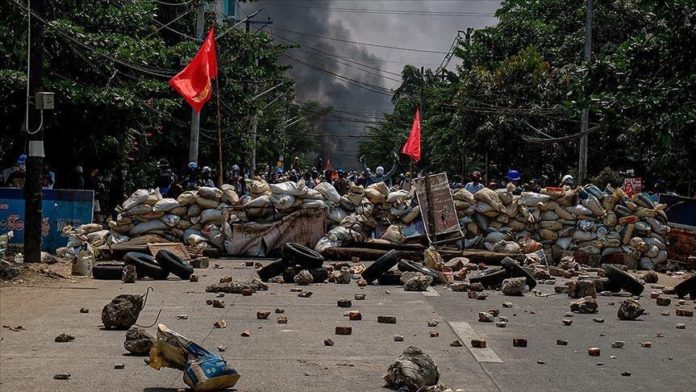 The Myanmar military junta has killed at least 726 people in its violent crackdown on protests since its Feb. 1 coup, a local monitoring group said on Thursday.

“We compiled and documented 11 fallen heroes today. One from Mandalay died on 15 April, while 10 others were killed on previous days and documented today,” the Assistance Association for Political Prisoners (AAPP) said in an update.

As of April 15, a total of 3,151 people remain under detention, with 75 of them having been sentenced.

Arrest warrants have been issued for 813 more people, the statement said.

“A new technique of the regime of the junta is now using unregistered vehicles with fake license plates to smash into and arrest peaceful demonstrators,” the AAPP said.

Wai Moe Naing, a prominent leader of the anti-coup movement, was detained in Monywa in Sagaing Region, according to the statement.

The 26-year-old was reportedly taken to a military base after being hit with a car and beaten by a group of armed men.

“AAPP is concerned for his access to adequate medical treatment from the crash … The junta is using torture in interrogation centers, we are also, therefore, worried the lives and dignity of detainees will be violated,” the group added.

According to local media outlet The Irrawady, a man was shot dead and four others were injured in a mosque compound when junta forces stormed a Muslim neighborhood in Mandalay on Thursday morning.

Ko Ko Htet, 20, was shot in the chest when five soldiers randomly opened fire in the compound of Sule Mosque in the Maha Aung Myay township, according to the report.

His disabled brother-in-law, Ko Min Min Latt, was shot in the hand, it added.

The junta’s violence has continued amid Myanmar’s traditional Thingyan New Year holiday and the Muslim holy month of Ramadan.

“These religious compounds and places of worship are supposed to be protected, but this junta targets these areas, looting and openly destroying property,” the AAPP said.