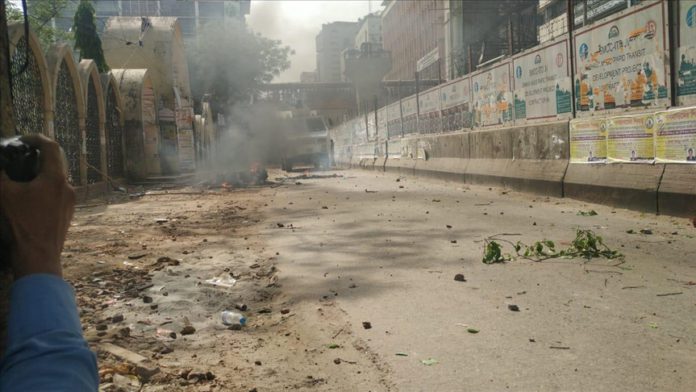 At least four people were killed and dozens were injured when activists of a non-political Islamic group clashed with police in Bangladesh’s largest port city on Friday afternoon, according to local police.

Several hundreds of Hefazat-e-Islam activists gathered after Friday prayers in Chittagong to protest the visit of Indian Prime Minister Narendra Modi. The police, on the other hand, erected barricades and blocked the roads, infuriating the activists.

The protesters attempted to dismantle the barricades, which sparked the clash. To disperse the demonstrators, police used tear gas shells and live bullets, as well as beating them with batons, according to eyewitnesses.

“Four are dead and their bodies have been taken to the morgue for autopsy,” Alauddin Talukder, assistant sub-inspector of the Chittagong Medical College Police Outpost, told Anadolu Agency.

Modi landed in Dhaka on Friday morning along with his entourage members on a two-day visit to join Bangladesh’s golden jubilee of independence and the 100th birth anniversary of its founding leader Sheikh Mujibur Rahman.

Earlier, in Dhaka, dozens of people were wounded, including three journalists, when police used tear gas shells to disperse demonstrators who were planning to march on a major road against the visit of India’s prime minister.

After the weekly Friday prayers, the protesters planned to begin a rally from the northern gate of Baitul Mukarram mosque in Dhaka. However, the police refused to let them allow. The area quickly became a battleground as some people pelted the police with stones, prompting them to retaliate with tear gas shelling.

Protesters set fire to many vehicles, including a motorcycle. After nearly two hours, the police were able to get the situation under control.

Taliban blamed for over 3,800 attacks after peace deal