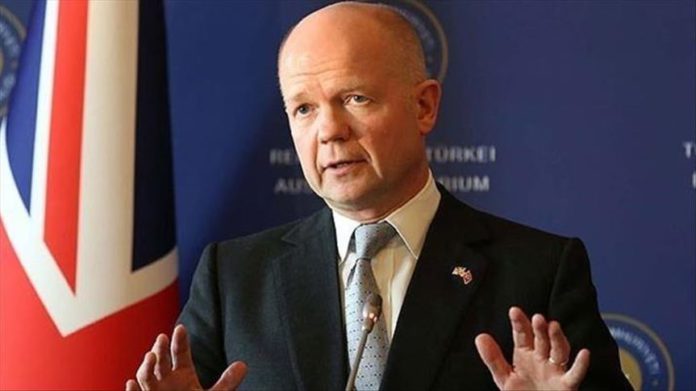 A new report by a British think tank said there could over 10 times the number of victims of modern slavery in the UK than previously estimated.

Former Foreign Secretary William Hague wrote in the report: “Most people find it hard to believe that, nearly two hundred years after Britain formally abolished slavery, the terrible crime of holding another human being enslaved is still widespread here.”

“That is because modern slavery is hidden from view, even though it is all around us,” said Hague, a member of the House of Lords, parliament’s upper chamber.

The report estimated the economic and social cost of modern slavery to be between £3.3 billion ($4.14 billion) and £4.3 billion, but this figure in turn was based on there being just 13,000 victims, meaning the real number could be far higher.

“Nobody knows the true scale and cost of the crime, but based on a new police data analysis tool we believe there could be at least 100,000 victims in the UK, with the actual number likely to be even greater,” the report said.

It also warned that there was a “serious risk” that coronavirus could “lead to a rise in modern slavery and human trafficking.”

“The main drivers of modern slavery – poverty, lack of opportunity and other vulnerabilities – will intensify, resulting in an increased risk of exploitation and abuse,” it said.

The report comes five years after the passage of the Modern Slavery Act, the crowning achievement of then-Prime Minister Theresa May.

The report said that people of all nationalities – including Brits – were being exploited by “ruthless criminal networks.”

They are used for sexual slavery and other crimes, and are often controlled with drugs and alcohol.

Despite more victims of modern slavery being discovered, prosecutions have not risen in line with that trend.

The report said that the 2015 act created a “false sense of security” around the issue. It added that victims spend months, or even years, waiting for a decision on their case to be made.

“Across our country, large numbers of young women have been forced into sexual slavery. Thousands of young men struggling with debt are drawn into forced labour from which they cannot escape. Hundreds of children are growing up never experiencing the freedom the rest of us enjoy,” Hague said.

He also called for the Modern Slavery Act to be tightened, with recommendations ranging from “enshrining survivor rights in law, to transforming police engagement with victims and tackling widespread benefit fraud.”

“The need to tighten key aspects of the 2015 Act and prioritise international co-ordination is well made. Working with other countries to stamp out the trade in people must be a top priority of a globally engaged Britain,” he said.

The publication of the report follows news that textile factories in Leicester, a city in central England, were paying workers as little as £3.50 an hour, less than half the mandatory national minimum wage, which is £8.72.

Leicester is the first place in the UK to undergo a local lockdown after a spike in coronavirus cases. This in turn drew attention to longstanding allegations of widespread exploitation in its textile factories, of which the city council estimates there are 1,500.

Justice Secretary Robert Buckland told Sky News: “A light has now been shone on an appalling litany of abuse and I’m glad to hear that the National Crime Agency (NCA) is now conducting an investigation.”

“Modern-day slavery is all around us, it’s in every town and city in Britain and, indeed, in our rural areas as well,” he added.

“It takes many forms. But this type of exploitation – people being paid well under the minimum wage, having to work in unacceptable conditions – that sort of abuse has to be stamped out, it has to be examined, we have to follow the evidence and prosecute wherever possible.”

Government authorities are also investigating allegations that some of the factories forced their workers to work in unsafe conditions while the country was in lockdown.

A Home Office spokesperson said: “We take all allegations of modern slavery extremely seriously and are determined to ensure ruthless criminals who exploit vulnerable people face the full force of the law.

“The National Crime Agency and others are looking into the appalling allegations about sweatshops in Leicester and the home secretary has been clear that anyone profiting from slave labor will have nowhere to hide.”