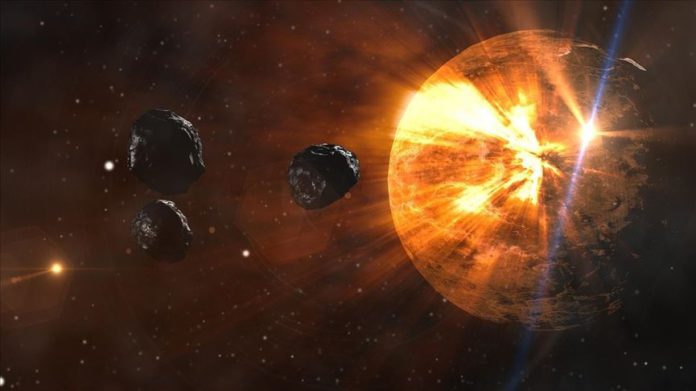 A group of researchers announced Monday they have detected a potential sign of aerial life within Venus’s atmosphere in what could be a major scientific breakthrough in the search for extraterrestrial life.

The planet’s harsh surface is widely considered to be inhospitable to life with surface temperatures exceeding 880 degrees Fahrenheit (470 degrees Celsius), according to NASA, as Venus’ thick sulfuric atmosphere traps in heat from the sun.

But the group of international scientists from the Massachusetts Institute of Technology (MIT), the UK’s Cardiff University and other high-profile universities and research centers said that two telescopes in Hawaii and Chile found signs of phosphine in the Venusian clouds. The toxic gas is found on Earth only if it is manufactured, or if it is produced by living organisms.

Venus’s clouds were thought to be able to tolerate microbial life so long as it could exist in the highly acidic environment, and the discovery of phosphine, a gas comprised of hydrogen and phosphorous “could point to this extra-terrestrial ‘aerial’ life,” the researchers said.

But they were quick to caution that the discovery of a “spectral fingerprint, or light-based signature,” of phosphine requires further study to determine if it, in fact, is proof of alien life.

A group of researchers from MIT studied possible scenarios to determine if anything other than life could have produced the phosphine, but concluded there are no known natural processes that would have accounted for the levels of phosphine that were detected.

“It’s very hard to prove a negative,” Clara Sousa-Silva, an MIT research scientist, said in a statement. “Now, astronomers will think of all the ways to justify phosphine without life, and I welcome that. Please do, because we are at the end of our possibilities to show abiotic processes that can make phosphine.”

MIT scientist Janusz Petkowski added: “This means either this is life, or it’s some sort of physical or chemical process that we do not expect to happen on rocky planets.”

NATO unity shored up amid Russian actions: US defense chief