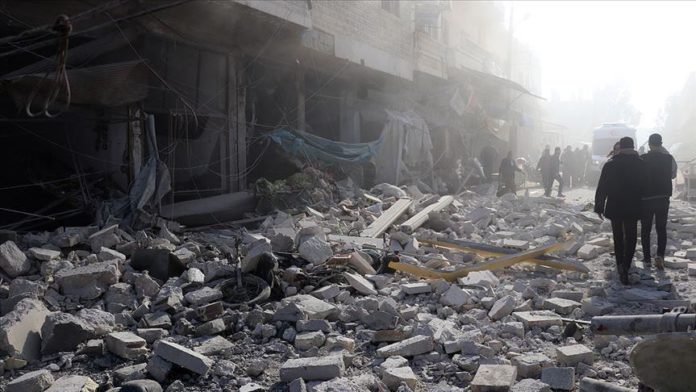 Dozens of air and ground attacks launched by the Syrian regime-Russian alliance in Idlib, Syria in the last 11 months were “violation of the laws of war,” a Human Rights Watch (HRW) study said Thursday.

The report confirmed 46 ground and air attacks that directly or indirectly damaged civilian objects and infrastructure in Idlib in violation of international humanitarian law, or the laws of war.

The alliance used cluster munitions, incendiary weapons and improvised barrel bombs in populated areas in which at least 1,600 civilians were killed, forced the displacement of an estimated 1.4 million people and civilian infrastructure destroyed and damaged.

“These attacks represent only a fraction of the total attacks during that time in Idlib and surrounding areas,” HRW said. “They reveal repeated violations of the laws of war that were apparent war crimes, and may amount to crimes against humanity.”

The attacks “seriously impaired” the rights of Syrians to health, education and an adequate standard of living, it said.

HRW said it found no evidence of opposition military weapons, equipment or personnel in the vicinity at the time of the attacks.

“The overwhelming majority of attacks documented took place far from active fighting between Syrian government forces and anti-government armed groups,” it said, and added that they occurred mostly in populated areas without advance warning.

Syria and Russia said, however, the offensive in Idlib was a response to repeated attacks on forces by anti-government armed groups and an effort to counter “terrorism.”

The study also noted that following a cease-fire in March after talks between Russia and Turkey, the Syrian government “regained control of nearly half the territory in and around Idlib, including hundreds of towns and villages that were largely depopulated because their residents had fled during the offensive.”

Syria has been ravaged by a multifaceted civil war since early 2011 when the Bashar al-Assad regime cracked down on pro-democracy protesters.

Iran: No plans to send plane's black box to Ukraine