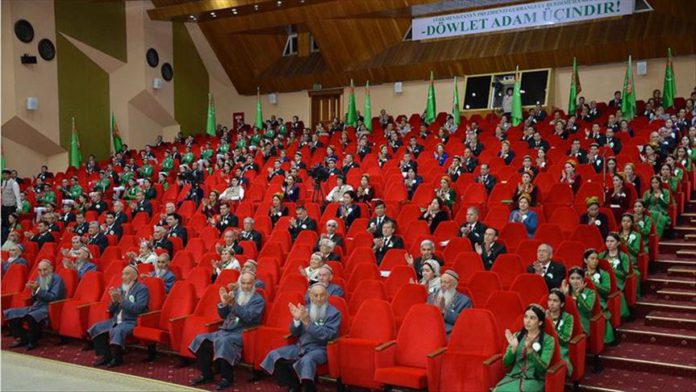 Turkmenistan on Friday hosted via a videoconference meeting of the People’s Council of Turkmenistan, the highest nationwide assembly of the Central Asian country.

Chaired by President Gurbanguly Berdimuhamedov, the meeting based in the capital city Ashgabat was attended virtually by council members throughout the country, senior governmental officials, members of public organizations, students, and representatives of the mass media.

Berdimuhamedov said as the result of hard work done in Turkmenistan, world-class social conditions were created for the nation, adding that these achievements were attained due to the friendship, sweat, and high spirituality of the people.

He also signed a law during the council meetings on amendments and additions to the nation’s Constitution.

Constitutional reforms are aimed at ensuring a prosperous life for the nation, and are seen as an important step towards further democratization, he said.

While over 70% of the nation’s budget is directed to the social sphere, “great efforts” are being made in all areas of the national economy to implement the program of socioeconomic development for 2019-2025, he said.

He also said work is underway to comprehensively develop the national education system, increase the range of import-substitute products, widely introduce innovative technologies in all spheres of the economy, boost exports of textile goods, and create competitive macro-structural transport and logistics systems.

Berdimuhamedov stressed that the proclamation, on Turkmenistan’s initiative, of 2021 as the International Year of Peace and Trust, in line with a UN General Assembly resolution, shows the whole world the country’s efforts to establish universal peace and friendship, adding that this became “another historic milestone” in strengthening the country’s neutral status.

The issues of successful implementation of historic and long-term programs in the country’s new development period, as well as issues related to its socioeconomic growth in 2021, and constitutional reforms aimed at spurring the work of representative bodies in the area of legislative power were discussed during the meeting, while the corresponding council documents were adopted.

As the highest representative body of the public authority, Turkemistan’s People’s Council, or Halk Maslahaty, provides for the application of the experience of Turkmen people in the area of state formation accumulated over centuries of history and large-scale participation in the adoption of significant public and political resolutions towards realizing conceptual ideas and unity.

The meeting is based on the country’s traditions of holding nationwide assemblies during which authorized representatives of communities made decisions on critical political, economic, and military issues within democratic principles.

The People’s Council also joined the system of state institutions performing functions in the field of legislation.

The importance of the state’s neutrality policy and multilateral cooperation with authoritative international organizations and institutions was also stressed during the meeting.

The country’s initiatives in the field of water, energy, and transport diplomacy were supported by the global community and helped strengthen the international authority of the state, said participants.

In 1992, Turkmenistan declared its neutrality as part of its foreign policy at the Helsinki summit of the Organization for Security and Cooperation in Europe (OSCE), and in 1995, the UN General Assembly unanimously adopted Turkmenistan’s permanent neutrality resolution.