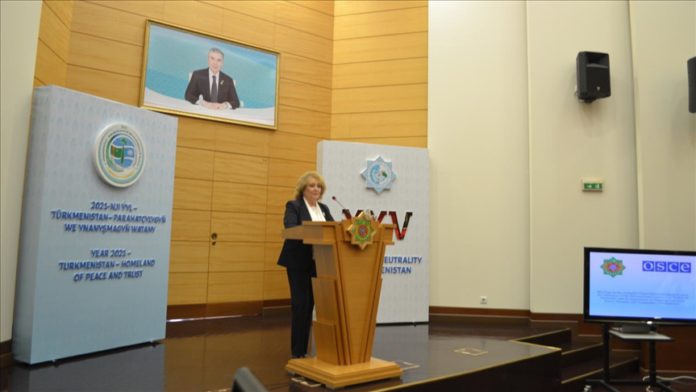 A document adopted last month marking the 25th anniversary of permanent neutrality of Turkmenistan is of great importance as it urges neutrality to maintain peace and mutual understanding, according to the country’s Foreign Ministry.

“[Head of the OSCE Center in Ashgabat] Ms. [Natalia] Drozd highlighted the importance of the Ashgabat Final Document, which urges to develop the concept of neutrality and promoting the role of neutralism in international efforts to maintain peace and mutual understanding,” the ministry said, referring to the briefing held by Drozd on Friday.

On Dec. 12, 2020, the international conference on the “policy of neutrality and its role in ensuring international peace, security and sustainable development” dedicated to the 25th anniversary of Permanent Neutrality of Turkmenistan took place in Ashgabat under the chairmanship of Turkmenistan’s President Gurbanguly Berdimuhamedov.

In the conference – an international event where the achievements of Turkmenistan in political, social, humanitarian, trade, economic and other spheres attained during the years of independence and neutrality were discussed — the Ashgabat Final Document was adopted.

“As known, this Document was circulated as the documents of the 75th session of the UN General Assembly and the UN Security Council,” said the ministry.

Highlighting the significant role of the policy of neutrality in strengthening regional and global security and stability, Drozd said the document urges for “active use of tools of preventive diplomacy, which is one of the key components of the OSCE functions.”

She added that the document welcomes the establishment of the Group of Friends of Neutrality for Peace, Security and Development at the UN.

“This initiative of the Government of Turkmenistan is of particular importance since the Group will serve as an effective platform for maintaining equal dialogue on applying the potential of neutrality to improve international political cooperation,” Drozd was quoted as saying.

On the UN General Assembly’s resolution declaring 2021 as the International Year of Peace and Confidence, she said the resolution was initiated by Turkmenistan which is a move that reaffirms the country’s “commitment to the use of neutrality to facilitate global efforts to promote peace and security.”

In 1992, Turkmenistan declared its neutrality as part of its foreign policy at the Helsinki summit of the Organization for Security and Cooperation in Europe (OSCE), and in 1995, the UN General Assembly unanimously adopted Turkmenistan’s permanent neutrality resolution.