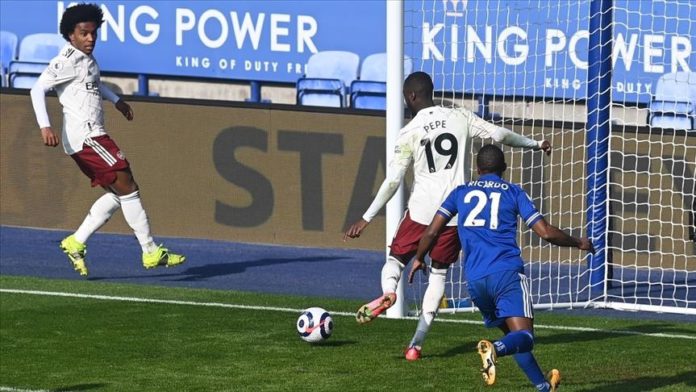 Arsenal came back from a 1-0 deficit against Leicester City to get a 3-1 win in the English Premier League match on Sunday.

Home team Leicester City scored the opener at the King Power Stadium as Belgian midfielder Youri Tielemans put the ball into the net in the sixth minute.

Arsenal leveled the game as Brazilian defender David Luiz scored with a header in the 39th minute.

The Gunners were awarded a penalty kick due to Leicester City defensive midfielder Wilfred Ndidi’s handball. French forward Alexandre Lacazette’s penalty gave the lead to Arsenal just before the half time.

Arsenal forward Nicolas Pepe made it 3-1 in the 52nd minute, scoring an open goal.

Leicester City’s Turkish defender Caglar Soyuncu played in the whole game and the team’s another Turkish player Cengiz Under was subbed in the second half.

Nicknamed the Foxes, third-place Leicester City have 49 points in 26 matches in the Premier League led by Manchester City with 62 points.

Arsenal are in the mid-table with 37 points.

In another game in the Premier League, Chelsea drew with Manchester United 0-0 at Stamford Bridge, London.

Second-placed Manchester United have 50 points in the league table.

Chelsea have 44 points to be in the fifth position.