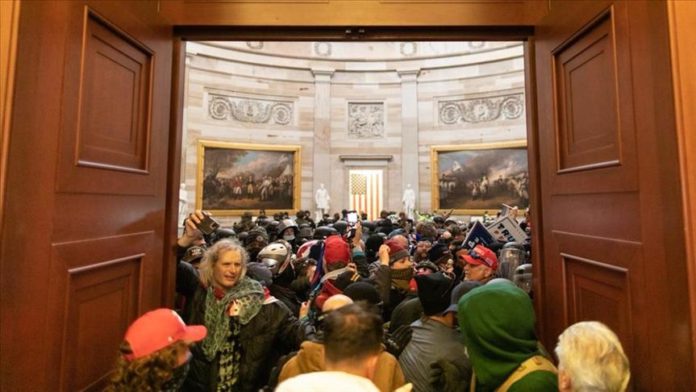 NEW YORK  – US officials continue to arrest rioters who broke into the Capitol building and are believed to be involved in crimes during deadly unrest in Washington earlier this week, sources said Saturday.

A man photographed carrying House of Representatives Speaker Nancy Pelosi’s podium during the riot has been arrested.

“Adam Johnson, 36, of Florida, was charged with one count of knowingly entering or remaining in any restricted building or grounds without lawful authority; one count of theft of government property; and one count of violent entry and disorderly conduct on Capitol grounds,” according to CNN, which cited the US Attorney’s Office.

Johnson was sent to the Pinellas County jail, the network reported.

And federal authorities took into custody a man who broke into Pelosi’s office during the riots, the Justice Department confirmed.

Richard Barnett was arrested in his home state of Arkansas, spokesman Joshua Stueve confirmed to Anadolu Agency. He was charged with one count each of entering restricted grounds, violent entry and public property theft.

Barnett was photographed posing on Pelosi’s desk in an image that went viral and stirred outrage.

The storming of the Capitol building erupted shortly after Trump riled supporters at a nearby location, repeating false charges that the election was stolen and vowing to never concede.

Five people were killed in the mayhem, including a Capitol police officer who was reportedly bludgeoned with a fire extinguisher, when Trump’s supporters overran Congress.