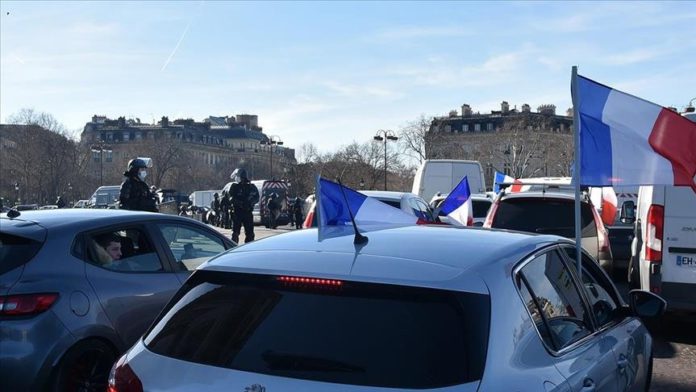 Motorists from the “freedom convoy” defied a ban Saturday to reach the center of Paris at the Champs-Elysees to demonstrate against vaccine mandate and other policies, resulting in several arrests, according to law enforcement agencies.

Interior Minister Gerald Darmanin in a statement on Twitter said 54 people were arrested and 337 were fined for participating in the “freedom convoy.” They included Jerome Rodrigues, one of the organizers of the convoy and a leading figure of the gilet jaunes, or the “yellow vests” movement, FranceInfo news reported.

Paris police banned demonstrations and warned it would not tolerate road blocking.

Thousands of police armed in riot gear were deployed in and around the main roads leading to the capital to disperse demonstrators.

They fired tear gas canisters as participating vehicles reached the Champs-Elysees and refused to move.

Motorists were joined by a large crowd of demonstrators who indulged in vandalism and clashed with police leading to violent skirmishes.

The gathering continued late into the evening as police struggled to disperse the crowd.

The French freedom convoy is influenced by the strike in Canada by the truckers who are also opposing that government’s vaccine requirements for cross-border movement into the US.

They are demanding “freedom” from the vaccine law, including minor children and lifting restrictions for health providers.