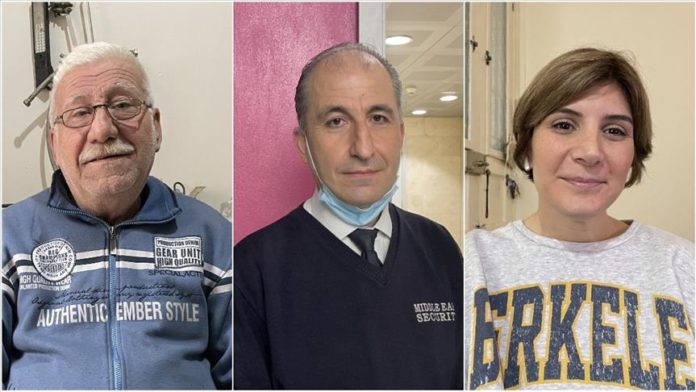 In a geographical quirk of fate, most of the Armenians who have lived in Lebanon for three generations can still speak fluent Turkish, a tongue they learned from their parents starting in the cradle.

Turkish people can run across with Armenians while wandering the streets of Beirut and end up chatting with them in Turkish.

Although a century has passed since they left Turkiye, besides those who continue to speak Turkish, there are also Armenians who have recently learned Turkish by themselves from popular exported Turkish TV shows.

The most interesting thing is that even many Armenians who have never visited Turkiye in their lives can speak Turkish very fluently.

Ermen Cerkezyan, 65, who lives in Beirut’s Burc Hammud district, where the majority of Armenians live, is also one of the Lebanese Armenians who can speak fluent Turkish.

Cerkezyan said that he was born in Lebanon and had the opportunity to visit Turkiye at the age of 45. His family is from Adana.

Speaking on the recent normalization of relations efforts between Turkiye and Armenia, Cerkezyan said that “of course it would be nice.”

“Let Armenian children think a little ahead. There is no end to it. Life doesn’t go like that. There should always be peace in life. If it were up to me, I would make peace (between Turkiye and Armenia). I want the country to progress. I do this so that my children and grandchildren can go further,” he said.

Deirsarkisyan, who you can come across humming Turkish folk songs in the shopping center where he works as a parking lot attendant, said that when he gets home, he usually turns on songs by Ibrahim Tatlises – a popular Turkish singer for decades – and listens to them until he falls asleep.

Deirsarkisyan told Anadolu Agency that he never had the chance to visit Turkiye.

He said that nearly 70% of Armenians in Lebanon can speak Turkish, adding that the new generation also learned Turkish thanks to Turkish soap operas.

“Lebanese people who hear me speak Turkish sometimes ask, ‘What language is this?’ I also say that it’s Turkish, and that my parents are from Gaziantep and Adana,” in southeastern and southern Turkiye, he said.

Arli Hacaduryan, 36, whose mother is originally from Istanbul and father from Diyarbakır, is also one of those who speak Turkish very fluently.

Hacaduryan, who was born in Lebanon and works as a real estate consultant in Beirut, said: “When we were little, my mother always watched Turkish TV channels and Turkish series. Looking at them, my brother and I learned Turkish.”

Recalling her first visit to Istanbul with a smile, Hacaduryan said: “It was a bit funny at first. My brother and I felt like we were in a TV series. After that, we opened up a little bit.”

“When I go to Turkiye, the first couple of days are a bit difficult. But after that I open up and speak Turkish comfortably. They ask me if I’m Turkish or not. If I have friends who came to Lebanon from Turkiye, of course we speak Turkish. I have a few (Lebanese Armenian) friends, I watch TV series with them and we always speak Turkish when we gather,” she added.