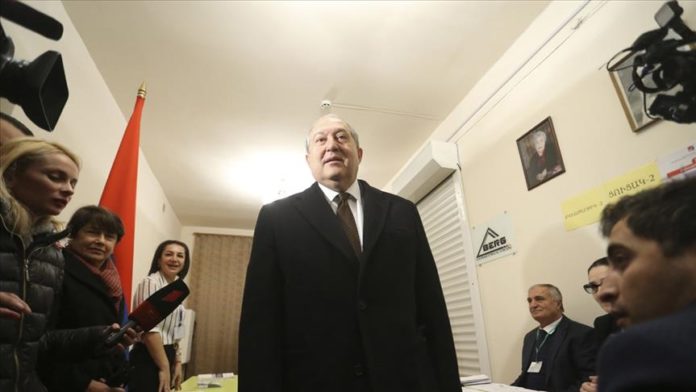 Armenia’s president said Sunday that the government should resign, new elections should be held within a year at the latest and an interim government of national accord should be formed, preferably a technocratic one.

Armen Sarkissian also criticized the Armenian government during his meeting with representatives of the Armenian community in Russia.

He described Armenian Prime Minister Nikol Pashinyan’s signing of a cease-fire agreement with Azerbaijan on the Nagorno-Karabakh issue and the withdrawal of Armenians from Karabakh as a “great tragedy.”

“There is a solution in any country where such a great tragedy has occurred. The government that led to this has to go,” he said.

He pointed out that the situation in Armenia was very different from two years ago when elections were held and proposed the establishment of a provisional national unity government and early elections.

Suggesting that a technocratic government be established on which all parties will agree, Sarkissian said this government could work for six months or a one-year period and lead the country to early elections.

Sargsyan also said that a constitutional referendum needed to be organized before the new elections to amend the constitution.

Claiming that the president or the prime minister should not make important decisions for the country alone in Armenia, Sarkissian said “the Constitution is not balanced at all in our country. There should be a balance between the Parliament, the government and the Presidency.”

He also emphasized that the country’s president should be elected by popular vote, not by the parliament as it is now.

In 2018, Pashinyan rose to prominence as the leader of widespread demonstrations across the country against the political establishment, demanding a more democratic Armenia and an end to corruption.

He was elected prime minister by the parliament after the bloc he led received 70.4% of the vote in elections held in December 2018.

– What happened in Karabakh?

The Armenian army launched attacks on civilians and Azerbaijani forces and violated three humanitarian cease-fire agreements during the 44-day conflict.

After nearly 30 years, Azerbaijan managed to liberate its territories from illegal Armenian occupation, while Armenia was defeated and had to sign a cease-fire agreement with Azerbaijan that put an end to the conflict in Nagorno-Karabakh on Nov.10.

Pashinyan said he had signed an “unspeakably painful” deal which allowed Azerbaijan to claim control over regions it took back in the fighting.

While Azerbaijan liberated several cities and nearly 300 settlements and villages amid the heavy fighting, Armenians are also handing over other territories under the deal, which is being monitored by both Russia and Turkey.

Turkish patient in Germany brought to Istanbul due to inadequate health...