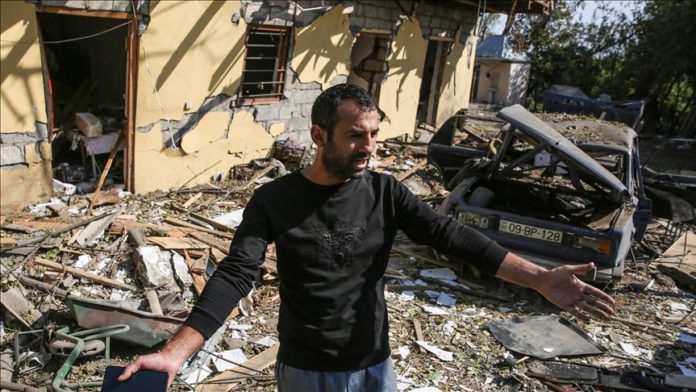 Since the morning hours, the Armenian forces shelled the villages of Goranboy, Terter, Aghdam, Barda, and Aghjabedi regions, leading to casualties, said the written statement.

The Azerbaijani army is taking “adequate action” against attacks, it added.

The ministry separately shared the footage of armored vehicles, mainly tanks, left by Armenian servicemen while fleeing Horadiz, a village in the Fuzuli region liberated from the Armenian occupation.

It also published drone footage of artillery strikes inflicted during night battles on the headquarters, infrastructure, weapons, and ammunition depots of the military unit of Armenia.

The supplies of Azerbaijan’s military personnel participating in the counter-offensive operations are immediately provided under the instruction of President Ilham Aliyev, the statement said.

“The supply of our troops is carried out in a planned manner by the relevant departments, services, and structures. The military personnel participating in the battles are continuously provided with food, military uniform, household items, and necessary properties, ammunition, but the military and combat equipment – with fuel for 24 hours a day.”

The Defense Ministry also said that there were no problems with the supply of combat operations.

All tasks related to supply and equipment were carried out in a timely manner, it added.

Hikmet Hajiyev, the assistant to the president and foreign policy chief for the Azerbaijani Presidency, said on Twitter that Armenia’s kamikadze drone was “successfully destroyed” by Azerbaijan’s air defense forces, adding that the drone was “whirling around civilian area.”

Hajiyev reiterated that Armenia’s “delibarate and indiscriminate attacks” with Smerch missiles and heavy artillery against Azerbaijani cities — including Ganja, Barda, Tartar and other cities — and civilians continues.

He also shared footage of destruction with precision guided missile of Grad missile launcher of Armenia which attacked Azerbaijani cities of Barda and Tartar, as well as civilians.

“Lives of many innocent civilians were saved and potential damage to civil infrastructure was prevented.”

Over 1 million Azerbaijanis became internally displaced people, while 20,000 were martyred by Armenian forces and 50,000 were wounded and became disabled, according to Azerbaijan’s official figures.