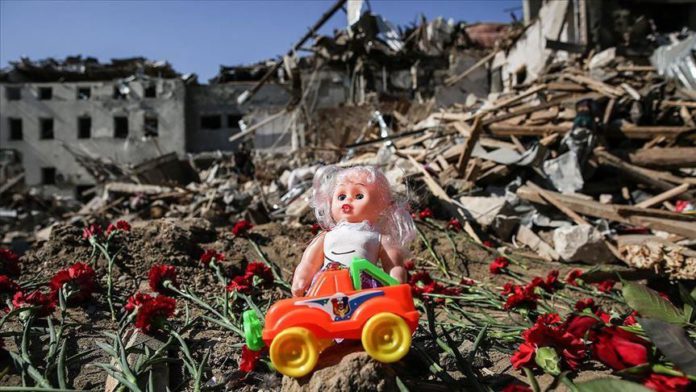 At least 11 children lost their lives and eight others were wounded in Armenian attacks on Azerbaijan since Sept. 27.

On the first day of the border clashes, Armenian forces launched heavy artillery fire on a village near Naftalan city in central Azerbaijan.

As a result of the artillery attacks, two children, aged 13 and 14, lost their lives.

In the attacks between Sept. 28 and Oct. 16, four children were killed by Armenian forces.

Moreover, three children were orphaned in the attack on Oct. 11 on Ganja city, the second-largest city of Azerbaijan with a population of nearly 500,000.

On Oct. 17, at least four children, including two infants, lost their lives because of the attacks on Ganja city.

Two infants, 5 and 10 months old, and two children, aged 13 and 15, died in this attack with mid-range ballistic missiles.

The attack took the life of a 7-year-old girl while she was playing with her sisters in the lawn of their house.

In less than 24 hours, another attack was carried out by Armenian forces on one of the most crowded streets of Barda city, wounding at least 70 civilians including eight children.

Poorer nations to get vaccines in 1st half of 2021: UN