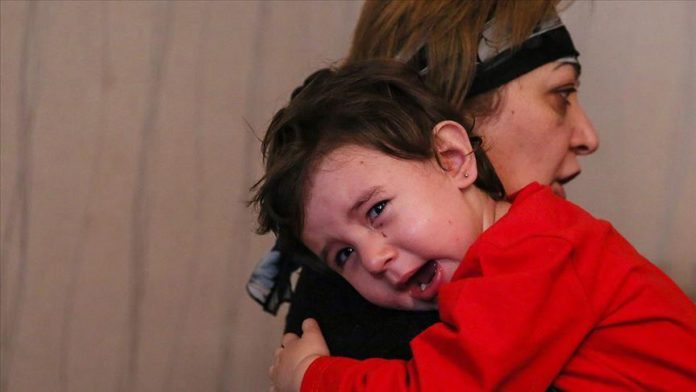 An Armenian attack on Azerbaijan’s second-largest city Ganja on Oct. 11, in violation of a humanitarian cease-fire, killed 10 civilians, leaving three children without a parent.

The attack also killed 2-year-old Nilay’s father and pregnant mother, and she was rescued from the ruins by rescue teams.

Nilay’s father Adil Aliyev and her grandmother Afak Aliyeva died under the wreck and her mother Gunay Aliyeva who remained under the wreck for three hours was later rescued and taken to a hospital but succumbed to her injuries the next day.

“They were going to celebrate Nilay’s second birthday in six days. But now she has neither a mother nor father,” said her aunt, Rena Guliyeva.

“She constantly cries to see her parents. We try to distract her, saying: ”Your mom will be here soon”,” she continued.

Nilay’s mother Gunay, just before the attack, had learnt at her doctor’s appointment that she was 10 days pregnant, Guliyeva added.

Ali Ahmedov, Gunay’s cousin said: “The Armenian attack ruined their lives. Nilay survived because she was in another room. The rescue teams took Gunay from the wreckage, she was severely injured, but she lost her life struggle at the hospital.”

But Armenian forces on Oct. 11 launched a missile strike on Ganja — although the region is outside the frontline zone — resulting in 10 civilian casualties and injuring 35.