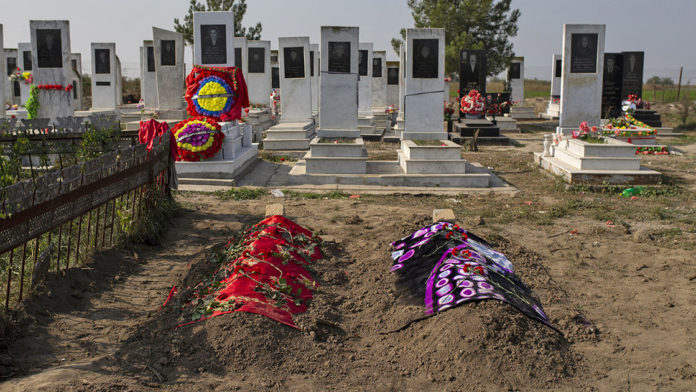 A mother who gave birth 22 days ago was killed in a cluster bomb attack by Armenia on Azerbaijan’s Barda city.

Mirzaliyeva and her father Mirzaliyev were killed Wednesday in the attack while they were headed to a doctor’s appointment.

Her husband Elcin Ismailov was fighting the Armenian army on the Tartar frontline when he was informed about the deaths.

“I saw my daughter and my wife only for one day when I came to visit them after birth, then I returned to the front,” said Ismailov, who has been fighting Armenian forces since Sept. 27.

“We traveled all over Azerbaijan for test-tube baby treatment last year. My wife got pregnant and we had a daughter, now 22 days old. We had been waiting for that moment for five years,” he said.

Ismailov said the pain is unbearable that his daughter will never know her mother.

“Now my daughter will grow an orphan. What was her sin to deserve this?” he asked.

A total of 21 civilians were killed and 70 wounded in the Armenian attack on the city’s center.

Turkey to attend OIC meeting in Saudi Arabia on Monday