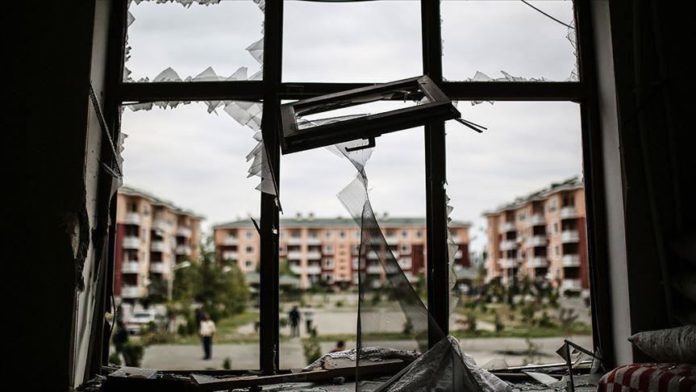 Azerbaijan on Monday said Armenian forces continued attacks on its civil settlements and military units, despite a fresh humanitarian cease-fire in Karabakh.

The villages of Aghdam region, as well as the city of Tartar and its surrounding villages are being subjected to heavy shelling, Azerbaijan’s Defense Ministry said in a statement.

“…the Armenian armed forces are firing at our human settlements, and the positions of units of the Azerbaijan Army along the entire front, as well as on the Armenia-Azerbaijan state border using various types of small arms, mortars, and howitzers,” the statement read.

The ministry added that Armenian forces also opened fired on Tovuz, Gadabay, and Dashkesan regions of Azerbaijan from the Berd, Chambarak, and Vardenis regions of Armenia.

The positions of Azerbaijani units in Tartar, Aghdam, Fuzuli, Lachin, and Gubadli also came under attack, it said.

The ministry, meanwhile, claimed that Azerbaijani army units are fully complying with the armistice.

Recent clashes erupted on Sept. 27, and since then Armenia has repeatedly attacked Azerbaijani civilians and forces.

Multiple UN resolutions, and many international organizations demand the withdrawal of the occupying forces.

The US brokered a new temporary humanitarian truce between Baku and Yerevan, which came into effect at 08:00 a.m. local time (0400GMT) Monday.

Earlier cease-fires for the exchange of prisoners and bodies, reached on Oct. 10 and Oct. 17 respectively, were also violated by Armenia.

At least 65 Azerbaijani civilians have died, and 297 injured in Armenian attacks so far, according to Azerbaijan’s Chief Prosecutor’s Office.

While world powers have called for a lasting cease-fire, Turkey has supported Baku’s right to self-defense, and demanded the withdrawal of Armenia’s occupying forces.