TurkishPress
Home News 'Armenia should withdraw from every occupied territory' 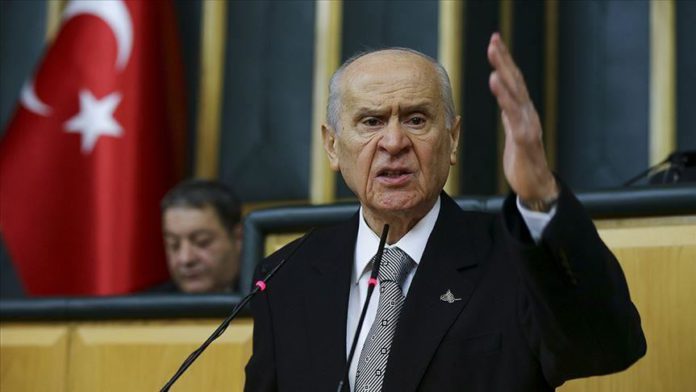 A prominent Turkish politician called on Armenia to withdraw from the occupied territories “without any precondition.”

“Upper Karabakh should be given to Azerbaijan […] After that the cease-fire and diplomatic talks should begin,” Devlet Bahceli, the leader of Nationalist Movement Party (MHP), told his party’s parliamentary group.

“If Armenia gets stronger […] the future will have dire consequences for Azerbaijani Turks. For sure, Turkey will be forced to deal with these shocking developments,” Bahceli said.

He noted: “Armenia should withdraw from every occupied territory.”

The missile strike by Armenian forces around 2.00 a.m. local time Sunday (2200GMT Saturday) on Ganja, located outside the frontline zone, violated a tentative cease-fire between the two sides and left at least 35 civilians wounded, including women and children.

A humanitarian truce had been declared on Saturday for the exchange of prisoners and the retrieval of the bodies of the dead in Upper Karabakh, or Nagorno-Karabakh, an internationally recognized territory of Azerbaijan.

Bahceli criticized the meeting in Moscow, saying it failed to bring out any solution.

“In our opinion, this [the meeting] is a concession,” he said.

Many world powers including Russia, France, and the US have called for a new cease-fire. Turkey, meanwhile, has supported Baku’s right to self-defense and demanded the withdrawal of Armenia’s occupying forces.

Bahceli said that the YPG/PKK terrorists have claimed responsibility for the forests fires in southern Hatay province.

“They [terrorists] are the children of devil,” he said and called for bringing the perpetrators to justice.

On Saturday, at least 10 people suffered minor injuries due to the fires in the province.

Mother joins sit-in to inspire others to defy terrorist PKK