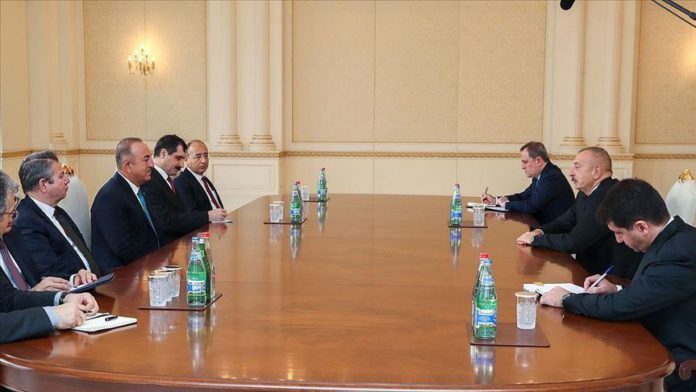 The Azerbaijani president on Sunday held Armenian Prime Minister Nikol Pashinyan responsible for continued war in Upper Karabakh and casualties on both sides.

Ilham Aliyev made the remarks at a meeting with Turkey’s Foreign Minister Mevlut Cavusoglu in Azerbaijan’s capital Baku.

He said the move to write the letter clearly shows that Armenia has accepted defeat but does not want to surrender.

“It is the most reasonable option for Armenia to declare its defeat, remove its armies from our land and, solve the problems through dialogue,” he said.

“The problem is being solved now. Azerbaijan alone implements the relevant resolutions of the United Nations Security Council,” he added.

Thanking the people of Turkey for their support, he said the Turkish media works in the war-zone risking their lives for factual reportage.

After shelling in Azerbaijan’s Ganja and Barda cities, Turkish media was the first to reach the scene, he added.

Cavusoglu said Turkey’s President Recep Tayyip Erdogan had instructed them to stay with Azerbaijan in their hour of need.

“Everyone sees what Armenia is doing and violates the cease-fire every time, but many do not want to say this. Therefore, we will continue to defend our rights by further strengthening the solidarity between us,” Cavusoglu added.

Four UN Security Council resolutions and two from the UN General Assembly, as well as international organizations, demand the “immediate complete and unconditional withdrawal of the occupying forces” from the occupied Azerbaijani territory.

US: Laura strengthens into major hurricane