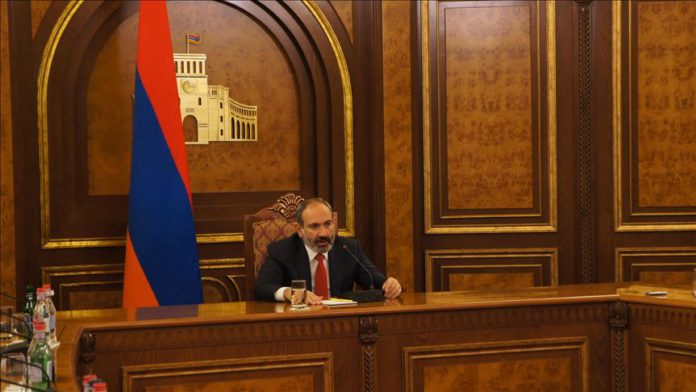 Armenian Prime Minister Nikol Pashinyan is trying to hold Azerbaijan responsible for civilian casualties by urging his nation to “fight on the front,” according to experts.

Mesut Hakki Casin, a professor at law at Yeditepe University in Istanbul, told Anadolu Agency that with the targeting of civilians in the Upper Karabakh conflict, the situation in the region has now become the subject of international criminal law.

He said to evaluate crimes committed in the region, it is essential to look at provisions of The Hague and Geneva Conventions.

Noting that crimes indirectly related to the Rome Statute treaty of the International Criminal Court, to which Azerbaijan and Armenia are not a party, were committed in the Karabakh area, Casin said targeting civilians, in particular, was a “serious war crime.”

He pointed out that despite a cease-fire, Ganja in Azerbaijan was targeted twice by Armenian forces, leading to casualties for children and civilians, and Armenia “deliberately targeted civilians” instead of targets on the battlefield.

In two missile attacks on Ganja, a major city far from the front line, Armenia killed two dozen civilians, including children, and injured scores of others.

Casin emphasized that it was intended to destroy a national, ethnic and religious group in Karabakh partially or completely, and that it was “genocide” and a “war crime.”

Stating that targeting civilians and children systematically should be punished, Casin said: “Armenian officials, who ordered the targeting of civilians, should be tried in the case of individual responsibility, as in the case of [Chilean dictator Augusto] Pinochet.

“Azerbaijan wants to keep the war narrow and liberate its own lands by obeying the requirements of the laws of war. We see that it shows sensitivity towards civilians and treats the injured. On the other hand, on the opposite side we see an Armenia which wants to expand the front, does not intend to leave the occupied territories, and commits an open war crime by targeting civilians.”

He also underlined that Armenia is committing crimes not on its own territory, but in the area it keeps under occupation.

“Considering the crimes they have committed against civilians, the families of those murdered children by filing a lawsuit will definitely demand the Armenian authorities to be punished,” he said

The International Criminal Court, on which the Rome Statute forms the basis, holds the power to try individuals depending on crimes they committed, the professor added.

Alev Kilic, head of the Center for Eurasian Studies, said Pashinyan was “in panic” and tries to convince the public they “are strong politically, internationally and militarily, we can always stand against Azerbaijan.”

Noting that none of the claims were revealed to be consistent and correct, Kilic said: “Therefore, this caused Pashinyan to fall into a very difficult situation in his domestic public opinion. Pashinyan is obviously a goner. He makes his final struggles to see how he can hold on.”

Pashinyan now seeks help from his nation, asking them to do “whatever they can,” he said.

Kilic went on to say that if Pashinyan thinks he could “negotiate and seek a diplomatic solution” instead of withdrawing from Azerbaijani territories occupied by Armenia, it will not be a solution to the conflict.

Huseyin Pazarci, a law professor at Near East University in the Turkish Republic of Northern Cyprus, said leaving the Karabakh area was not meant behind Pashinyan’s statements, adding that the remarks made about lands belonging to Azerbaijan could not have any special legal effect.

“Pashinyan’s call to the Armenian people inviting them to the front can be considered as an effort to hold Azerbaijan responsible for civilian casualties. Although this situation shows that Armenia will do its best not to leave the Upper Karabakh, the front updates show that Azerbaijan is carrying out a ‘highly successful strategy.’”

Russia had a “great influence” on Armenia, especially because it protected its borders and had bases in this region, he said.

“However, in the process, Russia takes an attitude by considering all its accounts in the region and it is not seen as completely pro-Armenia in its attitude here. The reason for this is that Pashinyan is under American influence,” he said.

Therefore, Pazarci said, the essence of Russia’s approach to this issue was to maintain control in the region.

Russia has been “swinging the lead” as part of the Organization for Security and Co-operation in Europe (OSCE) Minsk Group for nearly 30 years, he added.

Earlier, claiming that the Upper Karabakh issue could not be resolved diplomatically at the point reached, Pashinyan said all Armenians should fight “with weapons in their hands” until a diplomatic solution is reached.