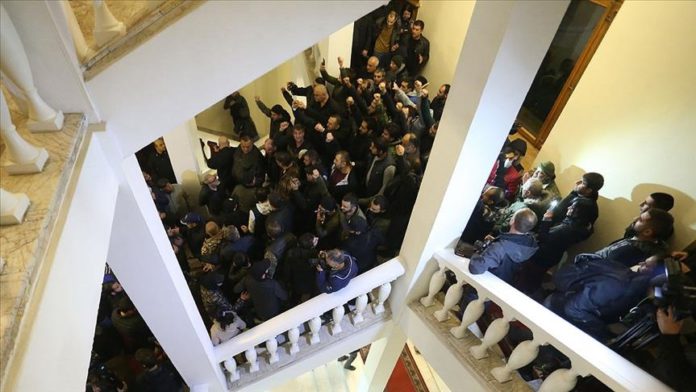 Protesters in Armenia’s capital on Thursday besieged the office of Prime Minister Nikol Pashinyan, calling for him to quit over the country’s defeat last month in Nagorno-Karabakh.

Anti-Pashinyan protesters surrounded the office building in Yerevan to prevent the Cabinet from working.

Security forces took precautions around other public institutions and organizations in the capital, but there were conflicts when protesters tried to block Cabinet ministers from entering and exiting the Prime Ministry.

The demonstrators blocked the road in front of the building and tried to prevent the movement of official vehicles.

The demonstrators also attacked an official vehicle by throwing snowballs and punching it after the car drove towards them.

Opposition leader Vazgen Mikaeli Manukyan argued that the conflict with Azerbaijan over Nagorno-Karabakh is ongoing and that only the active period of the war was over. A Russian-brokered cease-fire was signed on Nov. 9.

“Pashinyan has destroyed the country. He is guilty and has to go to prison,” said Manukyan.