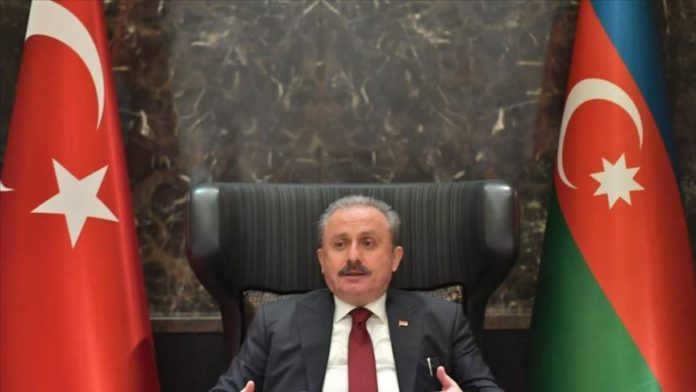 Turkey’s Parliament Speaker Mustafa Sentop, who is in Azerbaijan on a three-day official visit to hold talks on the ongoing Upper Karabakh conflict, said on Monday that Armenia is committing war crimes and its leadership could be tried by the International Criminal Court (ICC).

“Armenian forces bomb civilians, and that is a ‘war crime’ according to the Geneva Convention,” he said. Armenia is a state that does not even respect the law of war. So, it would be absurd to expect that it would respect the cease-fire.”

A second cease-fire went into effect Saturday midnight (2000GMT) after the Oct. 10 truce – meant to allow an exchange of prisoners and the recovery of bodies – and was breached hours later by Armenian missile attacks on Azerbaijan’s city of Ganja.

Turkey has supported Baku’s right to self-defense and demanded a withdrawal of Armenia’s occupying forces.

On the contrary, Sentop said: “Azerbaijan abides by the international law and the war ethics. It is just using its right to self-defense by the 51st article of the Charter of the United Nations. Azerbaijan’s army only fights with the military targets.”

He added that it was the responsibility of the co-head states of the OSCE Minsk Group to solve the dispute fairly “but they are donating arms to Armenia.”

“This is the reason this problem is lingering on for the last 30 years. It is because they do not want to do so,” he said.

Reiterating that Azerbaijan-Turkey ties are unique, Sentop said the “one nation, two states” slogan is not hollow, and it is evident from bilateral cooperation in every field.

“Our bonds would last forever,” he asserted. “We support Azerbaijan not only because of our bonds, but because Azerbaijan is right. Upper Karabakh has never been a separate place from Azerbaijan.”

He added: “Karabakh is a territory of Azerbaijan. Azerbaijan is right both in terms of history and international law. The United Nations Security Council has decisions to end the occupation, unconditionally. In all decisions of international organizations, Armenia is reported to be an occupier.”

The speaker, along with his delegation of deputies from different parties, also called on Azerbaijan’s President Ilham Aliyev.