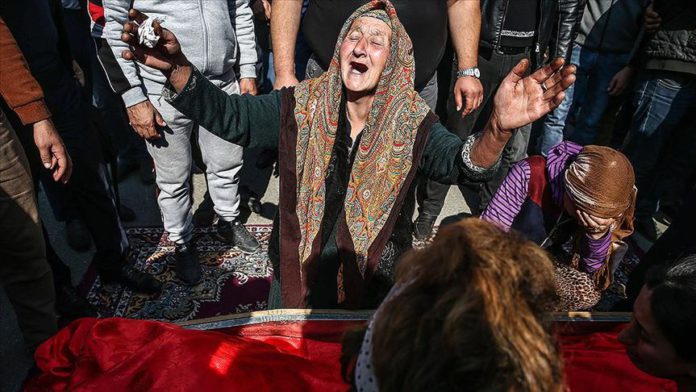 Amid the continuing clashes over Upper Karabakh, Turkish experts believe Armenian Prime Minister Nikol Pashinyan and his administration should be charged for war crimes.

Yalcin Sarikaya, an international relations professor at the Giresun University in northern Turkey, told Anadolu Agency that Pashinyan’s call to the people to fight against Azerbaijan is tantamount to “using civilians as human shields.”

He said that this is a war crime according to the Geneva Conventions.

Earlier this week, Pashinyan called on his countrymen to fight in Nagorno-Karabakh or Upper Karabakh, an internationally recognized territory of Azerbaijan under Armenian occupation since 1991.

“Calling children under age 15 to national armed forces, recruiting them or using them actively in conflicts are among the crimes […] however, Pashinyan […] shares this as a source of pride,” he said.

“Azerbaijan, [on the contrary], is fighting against an invasion, — which has been confirmed by many international instruments, including the resolutions of the United Nations Security Council and the General Assembly, — in its own country entirely within the scope of self-defense.”

“Armenia commits the crimes […] under the heading of ‘very serious violations’ in the Geneva Convention, since 1992.”

Accusing the Pashinyan administration of relocating civilians to Karabakh, Sarikaya said: “Especially in the last 10 years, efforts have been made to move civilian population from Syria and Lebanon to these territories belonging to Azerbaijan.”

Yelda Ongun, a professor of political science at the Baskent University in the capital Ankara, said the Azerbaijani army is continuing its just struggle to save its lands from occupation.

She emphasized that Azerbaijan strengthened its military and political power by taking diplomatic alliances and international law into consideration.

“We see that the Armenian army is trying to cover up its failures on the battlefield by attacking Azerbaijani civilian settlements, and committing war crimes by targeting civilians,” Ongun said.

‘Pashinyan wants to show himself as victim’

The professor said Armenia, which relies on support from Russia, the US, and France, is trying to provoke them against Turkey, which has supported Baku’s right to self-defense.

“Armenia continues its effort to bring Russian soldiers into the region through the Collective Security Treaty Organization [a military alliance between Russia, Armenia, Kazakhstan, Kyrgyzstan, Tajikistan, and Uzbekistan],” she said.

Ongun also described as “provocation” several media reports claiming that PKK elements have been placed in Nagorno-Karabakh, and received support from commander-level management of the Greek Cypriot administration.

“Pashinyan’s invitation to the Armenian people to the front line is nothing more than making himself a victim, showing Azerbaijan as aggressive and trying to get the international community behind him.

“In this way, Pashinyan wants to hold Azerbaijan responsible for civilian losses,” she added.

“Armenia, which was excluded from regional projects of Turkey, Azerbaijan, and Georgia due to its attitude, and lost its chance to become an energy route, has shown it is the biggest obstacle in regional peace and stability.”

Ismail Safi from the Ankara-based TOBB University said attacking Azerbaijani lands and civilian settlements with missiles is a war crime.

He said Armenia was pressurizing media to misreport facts in Karabakh, yet “the images of PKK-Armenian mercenaries who came to Nagorno-Karabakh from Syria to support Yerevan were shared by an Armenian deputy.”

Safi claimed that Turkey is deeply concerned about the possibility of Russian missiles falling into the hands of terrorists in Armenia.

He said the traditional alliance and cooperation model between Russia and Armenia in the South Caucasus will be radically disrupted by Pashinyan’s desire to change its axis toward the West.

He has made things difficult for Armenia, the professor said.

October 30, 2020
We use cookies to ensure that we give you the best experience on our website. If you continue to use this site we will assume that you are happy with it.Ok