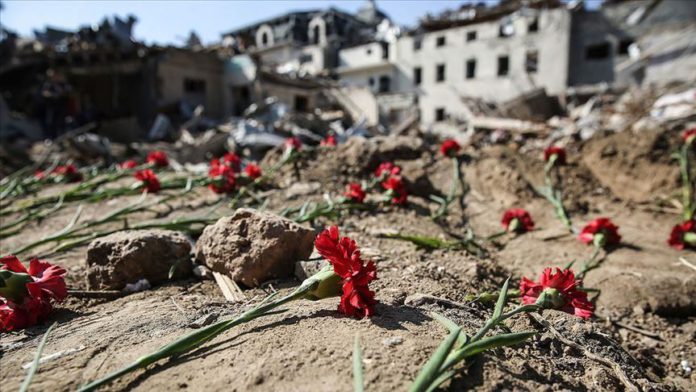 According to the Azerbaijani authorities, the Tartar region faced rocket attacks and heavy artillery shelling in the morning.

“Today at about 9 am [0500GMT], Akhundov Adavat Zahid, born in 1969, resident of Narliq settlement, Tartar District, was killed by shrapnels hitting the yard of his house. The house was severely damaged,” read a statement from the Prosecutor General’s Office.

It said at least eight more civilians were injured in the recent attacks.

Armenian forces continue their “terrorist acts” against Azerbaijani civilians and are “flagrantly violating” the humanitarian cease-fire that came into force last Saturday, the statement added.

‘Legitimate military targets will be destroyed’

The Azerbaijani army neutralized “legitimate military targets” that were threatening the civilian population of Azerbaijan, the country’s Defense Ministry said.

“On October 14, at about 01:00 [2100GMT], it was recorded that the Armenian side deployed several operational-tactical missile systems with ballistic missiles at the starting position in the border zone with the occupied Kalbajar region of Azerbaijan,” read a statement.

The weapons were targeted at the peaceful population and civilian infrastructure in Ganja, Mingachevir, and other cities of Azerbaijan, it said.

“The Azerbaijan Army has taken preventive actions to ensure against the recurrence of another war crime and to suppress the missile strike similar to the one committed by Armenia in Ganja on October 11,” the ministry said.

“As a result, operational-tactical missile systems brought into a state of readiness to deliver fire strikes were neutralized as a legitimate military target.”

Images of the Armenian missile systems were also shared by the ministry.

Armenia’s political and military leadership bears the entire responsibility for aggravating the situation, the statement added.

It said the situation on the Aghdere-Aghdam and Fizuli-Hadrut-Jabrayil directions of the front remained tense overnight.

“At night, the units of the Armenian armed forces attacked the positions of the Azerbaijan Army in some directions of the front. As a result of the measures we took, they were driven back, suffering losses,” read the statement.

Several vehicles of the Armenian military were also destroyed or disabled, it added.

The ministry said Azerbaijani troops were respecting the humanitarian cease-fire in force since Saturday, while also retaining their “operational advantage.”

The humanitarian truce for exchange of prisoners and retrieval of bodies came after a trilateral meeting in Moscow between the foreign ministers of Russia, Azerbaijan, and Armenia.

Armenian forces have continuously violated the agreement, even launching a missile strike on Azerbaijan’s second-largest city, Ganja – an area far from the front line – on Sunday, killing at least 10 people and injuring 35, including women and children.

Fresh clashes erupted between the two countries on Sept. 27, and since then Armenia has continued attacks on civilians and Azerbaijani forces.

Turkey has consistently supported Azerbaijan’s right to self-defense and demanded the withdrawal of Armenia’s occupying forces.

A year without school in Kashmir