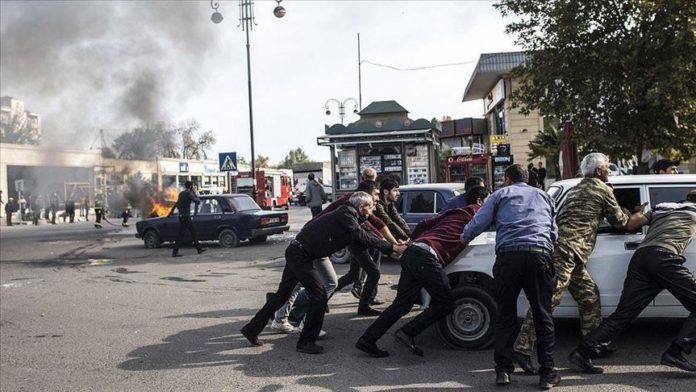 In violation of the latest cease-fire, the Armenian military continued targeting Azerbaijani civilian settlements and army positions on the border, Azerbaijan said Wednesday.

Armenian forces stationed in Berd, Chambarak, Vardenis and Gorus fired on the Azerbaijani territories of Tovuz, Gadabay, Dashkesan and Gubadli using various types of weapons at different times during the night and morning, according to the Azerbaijani Defense Ministry.

Meanwhile, the Armenian military also shelled the Tartar region in the morning hours, the ministry said.

Combat operations continued mainly in the Aghdere, Khojavend, Fuzuli, Zangilan and Gubadli direction of the front, it said, adding that the attempts of the Armenian forces to attack were “resolutely thwarted,” and that they retreated suffering losses.

“As a result of the retaliatory measures taken against the armed forces of Armenia, there are killed and wounded among the enemy personnel in various directions of the front. Several of their combat vehicles were destroyed. As a result of fire damage to the enemy’s artillery units, howitzers along with ammunition in the firing position were destroyed.”

The statement noted that the Armenian side was suffering logistical problems in the resupply of food, weapons and ammunition due to a significant loss in vehicles.

Yerevan had also fallen short in its ongoing efforts to muster 2,000 reservists to fight against Azerbaijan, it said, adding that so far, it could only assemble 300.

It claimed that even military contractors and police officers had refused to go to the front.

Separately, the ministry also shared footage of military vehicles, equipment and ammunition abandoned by Armenian forces who fled during the battles in the Gubadli direction.

Since the clashes erupted Sept. 27, Armenia has repeatedly attacked Azerbaijani civilians and forces, even violating three humanitarian cease-fires since Oct. 10.

A temporary humanitarian truce brokered by the US was announced Sunday and took effect 8.00 a.m. local time (0400GMT) Monday. However, it was short-lived as only a few minutes later, the Armenian forces again violated the cease-fire.

At least four civilians — including a two-year-old toddler — were killed and 13 were wounded including women and children when the Armenian army targeted civilian settlements in Azerbaijan’s Barda region.

The first armistice, reached on Oct. 10, was violated within 24 hours as Armenia attacked Ganja with missiles that claimed civilian lives.

In two missile strikes on Ganja, a major city far from the front line, Armenia killed over two dozen civilians, including children, and injured scores of others.

A second truce Oct. 17 was again violated by Armenia.

To date, at least 69 Azerbaijani civilians have died and 322 have been injured, while 2,338 houses and 92 multi-apartment residential buildings were destroyed and 415 civil facilities were damaged, according to Azerbaijan’s Prosecutor General’s Office.

World powers, including Russia, France, and the US, have called to halt tensions in the region. Turkey, meanwhile, has supported Baku’s right to self-defense and demanded the withdrawal of Armenia’s occupying forces.

Prenatal cell phone use may cause behavioral problems