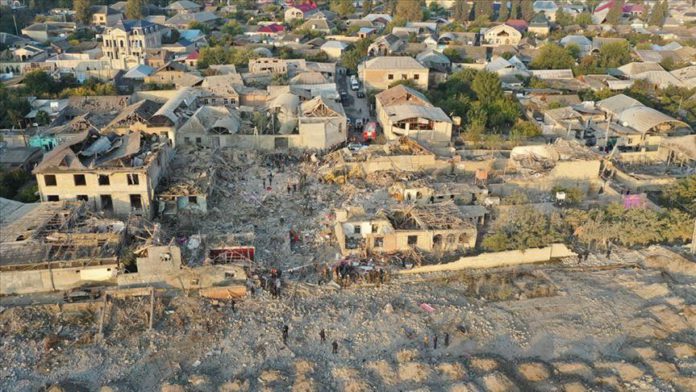 The Armenian forces on Friday continued targeting civilian settlements and units of the Azerbaijani army in various directions of the front with mortars, howitzers, and small arms, Azerbaijan’s Defense Ministry said.

Starting from early morning, the Armenian Armed Forces have been attacking the Tartar city, as well as Gazyan and Husanli villages of this region, a ministry statement said.

The Tapgaragoyunlu village in Goranboy region was also shelled by the Armenian forces last night, said the statement.

“Units of the Azerbaijan Army are taking retaliatory measures to suppress the enemy’s firing points,” it added.

Noting that these regions are geographically away from the “theatre of combat operations”, Hikmet Hajiyev, the assistant to the Azerbaijani president, said on Twitter that Armenia tries to “broaden the geography of military operations” by such provocations.

The ministry said that the combat operations continued with varying intensity, mainly in the Aghdere, Aghdam, Khojavend, and Gubadli directions of the front.

“The enemy was forced to retreat suffering casualties on personnel and military vehicles in some areas of the front,” it said.

Noting that the combat operations are currently underway, the ministry said that the operational situation is “under the control” of Azerbaijani troops.

The latest US-brokered temporary humanitarian cease-fire between Azerbaijan and Armenia went into effect on Oct. 26. However, it was short-lived, as only a few minutes after it got effective, Armenian forces again violated the truce.

The first armistice, reached on Oct. 10, was violated within 24 hours as Armenian missile attacks on the Azerbaijani city of Ganja claiming many civilian lives.

Another truce on Oct. 17 was also violated by Armenia troops.

Countries continue to provide Turkey with support as it battles fires