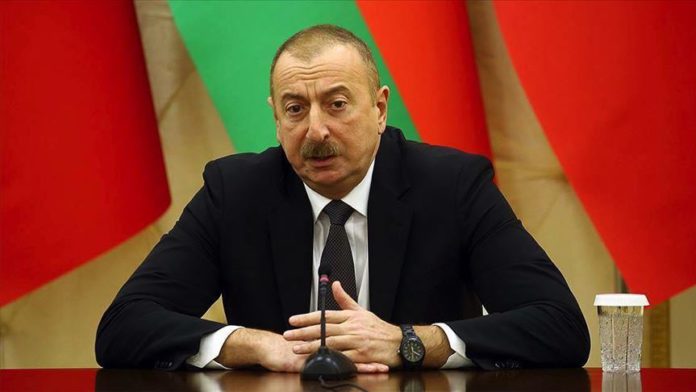 Though Azerbaijan agreed to a fresh humanitarian cease-fire to exchange prisoners and bodies, Armenian forces broke the truce only minutes after it was supposed to take effect, the Azerbaijani leader said Monday, marking the third such truce broken by Armenia in less than a month.

President Ilham Aliyev also stressed that those who are pressing for a humanitarian cease-fire are in fact sending weapons to Armenia.

“Why would anyone who wants a cease-fire send weapons?” he asked in an address to the nation.

On Armenia’s supporters, Aliyev said, “If you want to save the Armenian state, tell them to leave our lands,” referring to Upper Karabakh (Nagorno-Karabakh), occupied by Armenia by nearly 30 years. “They will go out with a word of yours.”

He also underlined that since the current hostilities started on Sept. 27, the Azerbaijani Armed Forces have destroyed 252 Armenian tanks and seized another 53, as well as destroyed six S-300 anti-aircraft missile systems.

“Where do such expensive weapons come from in a country with such a bad economy? I’m asking, where’s the money coming from for this?” he asked.

Aliyev also announced the names of 17 villages liberated from Armenia’s occupation a day earlier, along with the city of Gubadli.

Azerbaijan on Monday said Armenian forces continued their attacks on Azerbaijani civilian settlements and military units, despite the fresh humanitarian cease-fire in the region.

The villages of the Aghdam region, as well as the city of Tartar and its surrounding villages, were subject to heavy shelling, Azerbaijan’s Defense Ministry said in a statement.

The ministry added that Armenian forces also opened fired on the Tovuz, Gadabay, and Dashkesan regions of Azerbaijan from the Berd, Chambarak, and Vardenis regions of Armenia.

A new US-brokered temporary humanitarian truce between Azerbaijan and Armenia was announced Sunday and came into effect as of 8 a.m. local time (0400GMT) Monday morning.

The first armistice reached on Oct. 10 was violated within 24 hours as Armenian missile attacks on the Azerbaijani city of Ganja claimed many civilian lives.

Since the clashes erupted on Sept. 27, Armenia has repeatedly attacked Azerbaijani civilians and forces.

To date at least 65 Azerbaijani civilians have died and 297 others were injured, while 2,243 houses and 90 multi-apartment residential buildings were destroyed, and 402 civil facilities were damaged in Armenian attacks, according to Azerbaijani officials.

World powers, including Russia, France, and the US, have called for a lasting cease-fire. Turkey, meanwhile, has supported Baku’s right to self-defense and demanded the withdrawal of Armenia’s occupying forces.