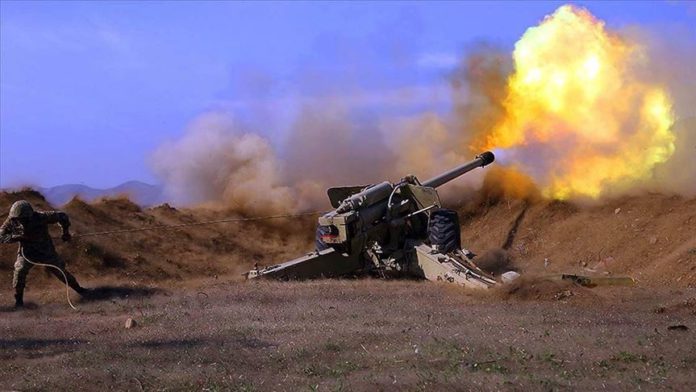 Leaving one month of Armenia-Azerbaijan clashes behind, new horizons appear in Upper Karabakh region as Azerbaijani army in 30 days liberated many villages, settlements, and cities from nearly three-decades-long Armenian occupation.

The escalation of border clashes along the Armenia-Azerbaijan frontier on Sept. 27 was the latest rekindling of a longstanding conflict between the two former Soviet countries, which have had tense relations since 1991, when the Armenian military occupied Upper Karabakh, or Nagorno-Karabakh, an internationally recognized territory of Azerbaijan, and seven adjacent regions.

Despite a cease-fire reached in 1994, the fire actually never ceased.

Since then, the peace negotiations have stalled and clashes erupted frequently around the Upper Karabakh — the heart of a decades-long armed standoff between the neighboring countries — and along the Armenia-Azerbaijan frontier.

In June 2010, August 2014, November 2014, December 2015, and other periods, whenever high-level talks on Upper Karabakh were at issue, cease-fire violations caused significant losses from both sides and made war scenarios take part in the agenda.

But within a few days of each of these tensions, the previous order was restored.

Following the 1994 armistice, the most extensive clashes occurred in April 2016, also known as the “four-day war.”

Azerbaijan, which responded to the Armenian provocations during those conflicts, saved part of its territory from Armenia’s occupation by inflicting great losses on the other side, and took psychological advantage over Armenia, which seriously disturbed Yerevan and its supporters.

Azerbaijan this time has been much stronger militarily, economically, and diplomatically than in the early 1990s.

On April 6, 2016, a day after Azerbaijan and Armenia halted military operations along the front line between the countries, the Azerbaijani Defense Ministry announced that the Armenian army had already violated fresh cease-fire 115 times, adding that Baku had abided by the truce.

Azerbaijani President Ilham Aliyev then accused Armenia of carrying out “another provocation” on the line of contact and attacking the positions of Azerbaijan.

On Aug. 23, the “sabotage-reconnaissance group” of the Armenian Armed Forces in the early morning hours made an attempt to commit a provocation in the direction of Azerbaijan’s Goranboy district near the front.

During the battle, the commander of the Armenian sabotage group, 1st Lt. Gurgin Alberyan, was taken prisoner.

The ministry meanwhile claimed that “all responsibility for the aggravation of the situation on the front lies directly with the military-political leadership of Armenia.”

On July 12, Armenian forces violated an ongoing cease-fire and targeted positions of Azerbaijan’s army in the northwestern Tovuz district resulting in casualties.

They later withdrew after suffering losses following retaliation from the Azerbaijani military.

As many as 12 Azerbaijani soldiers, including a major general and a colonel, have been martyred, while four others injured in a border clash. A 76-year-old Azerbaijani citizen also lost his life in the Armenian attacks on the border district.

Azerbaijan has blasted Armenia’s “provocative” actions, with Ankara supporting Baku and warning Yerevan that it would not hesitate to stand against any attack on its eastern neighbor.

Hikmat Hajiyev, the assistant to the president and foreign policy chief for Azerbaijan’s Presidency, said that using large-caliber weapons, mortar launchers, and artillery, the Armenian army launched an intensive attack on the positions of the Azerbaijani Armed Forces along the frontline, as well as the villages of Gapanli in the Tartar district, Chiragli and Orta Garavand in the Aghdam district, Alkhanli and Shukurbayli in the Fuzuli district, and Jojug Marjanli in the Jabrayil district.

“We officially announce that the Azerbaijan Army does not target the civilian population, civilian facilities, or civilian infrastructure. Unlike the occupying country Armenia, during military operations, Azerbaijan complies with the requirements of the regulation of international humanitarian law, including the Geneva Conventions,” the Azerbaijani Defense Ministry said.

Baku many times said it was determined to continue the “patriotic war” until Armenian forces withdraw from Azerbaijan’s occupied territories, adding that it was ready to immediately stop battles if Armenia’s leadership provides schedule of its forces pulling back from the occupied lands.

On Oct. 10, a new humanitarian cease-fire agreed between Azerbaijan and Armenia for the exchange of prisoners and retrieval of bodies from the conflict zone came into force at noon local time (0800GMT).

The truce came after 11-hours-long trilateral meeting in Moscow between the foreign ministers of Russia, Azerbaijan, and Armenia.

“Despite the agreement to declare a cease-fire at 12 pm [local time], the Armenian army attempted to attack in the Aghdere-Tartar and Fuzuli-Jabrayil directions,” the ministry said in a statement.

“At the same time, a number of our human settlements are under artillery fire from the armed forces of Armenia,” it added.

On the night of Oct. 11, the missile strike by Armenian forces at around 2 a.m. local time (2200GMT on Oct. 10) on Ganja, located outside the frontline zone, within 24 hours of the truce violated a tentative armistice between the two sides, leaving at least 10 people dead and 35 others wounded, including women and children.

Early on Oct. 17, at least 13 civilians were killed, including four women and three minors, and nearly 50 others injured, when Armenian missiles once again struck Ganja, a city with a population of half a million.

According to the Azerbaijan National Agency for Mine Action (ANAMA), the missiles fired on Ganja were identified as SCUD/Elbrus Operative-Tactical Ballistic Missiles.

It was Armenia’s second deadly assault in less than a week on Ganja.

A hydroelectric power plant in Mingachevir was also targeted by the Armenian army, but the missiles were neutralized by the Azerbaijani air defense.

Azerbaijan and Armenia have agreed to a fresh temporary humanitarian cease-fire starting from midnight Oct. 18.

The recent US-brokered temporary humanitarian cease-fire between Azerbaijan and Armenia was announced Sunday and took effect at 8 a.m. local time (0400GMT) Monday, however, it was short-lived as only a few minutes later, the Armenian forces again violated the truce.

“On Oct. 26 at 08.05 [0405GMT], the Armenian armed forces violated the new humanitarian cease-fire and shelled units of the Azerbaijani Army located in the Safiyan village of Lachin from the direction of Lachin city,” Azerbaijan’s Defense Ministry said on Twitter.

The ministry also said the Azerbaijani army units were fully complying with the armistice.

On Tuesday, the Armenian army opened fire on the cities of Goranboy, Tartar, and Barda with cannon balls and missiles, according to the Azerbaijani Defense Ministry.

At least four civilians — including a two-year-old toddler — were killed, while 13 wounded — including women and children — when the Armenian army targeted civilian settlements in Azerbaijan’s Barda region.

On Wednesday, according to initial reports, at least 19 civilians were killed and nearly 60 others wounded in another missile attack by Armenian forces on the city center of Barda at around 1 p.m. [0900GMT].

According to Azerbaijan’s Prosecutor General’s Office as of 11 a.m. [0700GMT] Wednesday, at least 69 Azerbaijani civilians have died and 322 injured, while 2,338 houses and 92 multi-apartment residential buildings were destroyed and 415 civil facilities damaged.

Azerbaijani leader has so far announced that over 120 villages, four cities, and several settlements as well as strategic points have been liberated from the Armenian occupation.

In total, about 20% of Azerbaijan’s territory — including Nagorno-Karabakh and seven adjacent regions — has remained under illegal Armenian occupation for nearly three decades.

Four UN Security Council resolutions and two from the UN General Assembly, as well as international organizations demand the “immediate complete and unconditional withdrawal of the occupying forces” from the occupied areas of Azerbaijan.

The Parliamentary Assembly of the Council of Europe (PACE) also refers to the territory as being under the occupation of the Armenian forces.

“Considerable parts of the territory of Azerbaijan are still occupied by Armenian forces, and separatist forces are still in control of the Nagorno-Karabakh region,” according to the PACE Resolution 1416, which was adopted on Jan. 25, 2005.

World powers, including Russia, France, and the US have called to halt tensions in the region. Turkey, meanwhile, has supported Baku’s right to self-defense and demanded the withdrawal of Armenia’s occupying forces.