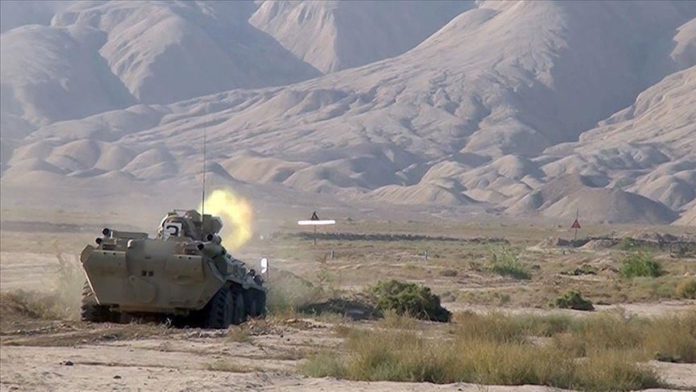 The escalation of border clashes along the Armenia-Azerbaijan frontier is the latest rekindling of a longstanding conflict between the two former Soviet countries.

The seven other occupied regions of Azerbaijan are the districts surrounding the Upper Karabakh area, including Lachin, Kalbajar, Aghdam, Fuzuli, Jabrayil, Qubadli and Zangilan.

During the Nagorno-Karabakh conflict, over one million Azerbaijanis became internally displaced persons (IDPs), while 20,000 were martyred in military operations and 50,000 were wounded and became disabled, according to Azerbaijan’s official figures.

In 1923, the Soviet government established the Nagorno-Karabakh Autonomous Oblast (NKAO), with a total area of 4,400 square kilometers (around 1,700 square miles) in the mountainous part of Karabakh, laying the foundation of separatist trends in that region.

In the early 1980s, Armenians in the Soviet Union’s leadership along with the leaders of Soviet Armenia and its diaspora abroad exploited the weakening of the central government of the USSR to embark on a campaign to annex the Nagorno-Karabakh Autonomous Oblast to Armenia.

The Armenia-Azerbaijan Upper-Karabakh conflict was sparked with the open territorial claims of Armenians to Azerbaijan’s historical lands, as well as ethnic provocations in 1988.

At the Feb. 20, 1988 session of the Nagorno-Karabakh Autonomous Oblast Soviet of People’s Deputies, members of the region’s Armenian community adopted a resolution to appeal to the legislative body the Supreme Soviet of Azerbaijan SSR and the Armenian Soviet Socialist Republic (Armenian SSR, or Soviet Armenia) to annex NKAO to the Armenian SSR.

On Feb. 22, 1988, the Armenians opened fire on a peaceful demonstration staged by Azerbaijanis near the town of Asgaran to protest against this resolution, which left two Azerbaijanis dead.

On Jan. 10, 1990, the Presidium of the USSR Supreme Soviet adopted the resolution: “On the nonconformity with the USSR Constitution of the acts on Nagorno-Karabakh adopted by Armenian SSR Supreme Soviet on December 1, 1989 and January 9, 1990.” The resolution described as illegal the Armenian SSR’s demand on the unification of the Armenian SSR and Nagorno-Karabakh, noting that such an act could only come about with the Azerbaijan SSR’s consent.

On Aug. 30, 1991, the Supreme Soviet of Azerbaijan declared the restoration of state independence, which was first gained back in 1918.

On Oct. 18, the country adopted the Constitutional Act: “On the State Independence of the Republic of Azerbaijan.”

On Nov. 26, 1991, the Supreme Soviet of Azerbaijani Republic adopted the Law “On the abolition of the Nagorno-Karabakh Autonomous Oblast of the Republic of Azerbaijan.”

During that time, having exploited the collapse of the Soviet Union and political instability in Azerbaijan caused by the internal standoff, Armenia began military operations in Nagorno-Karabakh with external military support.

On Feb. 26, 1992, Armenian forces committed a massacre — known as the Khojaly Genocide — of ethnic Azerbaijani people of the town of Khojaly.

During the two-hour Armenian offensive, 613 Azerbaijani citizens including 106 women, 63 children and 70 elderly people were killed and 487 others critically injured, according to Azerbaijani statistics. Eight families were completely wiped out, while 130 children lost one parent and 25 children lost both parents.

In May 1992, Armenian separatist forces occupied the towns of Shusha and Lachin.

On April 30, 1993, the UN Security Council adopted Resolution 822 demanding the immediate withdrawal of all occupying forces from Kalbajar district and other occupied areas of Azerbaijan.

The Security Council noted “with alarm the escalation in armed hostilities and, in particular, the latest invasion of Kalbajar district of the Republic of Azerbaijan by local Armenian forces,” said the resolution.

On July 29, 1993, the UN Security Council adopted Resolution 853 demanding the “immediate complete and unconditional withdrawal of the occupying forces” from Aghdam district and all other recently occupied areas of Azerbaijan.

On Oct. 14, 1993, the UN Security Council adopted Resolution 874 calling for the immediate implementation of the reciprocal and urgent steps provided in the Conference on Security and Cooperation in Europe (CSCE) Minsk Group’s “Adjusted timetable,” including the withdrawal of forces from recently occupied territories.

On Nov. 11, 1993, the UN Security Council adopted Resolution 884 condemning the recent violations of the cease-fire established between the parties which resulted in a resumption of hostilities and “particularly condemning the occupation of Zangilan district and the city of Horadiz, attacks on civilians and bombardments of the territory of the Republic of Azerbaijan.”

In February 1992, the mediation process for the Armenia-Azerbaijan Nagorno-Karabakh conflict was launched as part of the CSCE.

On March 24, 1992, the Committee of Senior Officials convened the Additional Meeting of the CSCE Council in Helsinki, where the Council decided to convene a special conference in Minsk that would act as a permanent framework for negotiations to find a “soonest possible peaceful solution to the conflict” in accordance with CSCE principals, commitments and provisions.

On Dec. 5-6, 1994, at the CSCE Budapest Summit, the heads of state and government of the CSCE participating states set up the institution of the co-chairmanship of the Minsk Conference in order to coordinate all mediation efforts within the CSCE framework.

The Budapest Summit tasked the CSCE chairman-in-office with conducting negotiations aimed at concluding a political agreement on the cessation of the armed conflict, eliminating the consequences of the conflict and allowing the convening of the Minsk Conference.

The Minsk Group has 17 members including Turkey. But only three — France, Russia and the US — hold co-chair positions. However, the co-chairs have not done much seriously to end the occupation.

On March 23, 1995, the Organization for Security and Cooperation in Europe (OSCE) chairman-in-office issued a mandate for the Co-Chairs of the Minsk Process.

On Dec. 2-3, 1996, at the OSCE Lisbon Summit, the Co-Chairs of the OSCE Minsk Group and the OSCE chairman-in-office recommended the principles that should be the basis for the settlement of the Nagorno-Karabakh conflict.

However, Armenia did not accept those principles and was the only country out of 54 OSCE participating states not to support them.

On March 14, 2008, the UN General Assembly adopted a resolution which covered legal, political and humanitarian aspects of the conflict and reaffirmed the principles of its settlement.

These principles reaffirmed Azerbaijan’s territorial integrity, expressed support for the country’s internationally recognized borders and demanded the immediate withdrawal of all Armenian forces from all occupied territories, reaffirmed the inalienable right of the Azerbaijani population to return to their homes and reaffirmed that no state should recognize as lawful the situation resulting from the occupation of Azerbaijan’s territories or render assistance in maintaining that situation.

The EU also called for the execution of the resolutions of the UN Security Council, the withdrawal of the Armenian army from the occupied Azerbaijani territories, respect for the territorial integrity and internationally-recognized borders of the sides, and an end to the internationally illegitimate and forced situation.

The Joint Declaration signed at the Eastern Partnership Summit in Brussels on Nov. 24, 2017, reaffirmed the EU’s determination to support the territorial integrity, sovereignty and independence of all its partners.

In April 2016, Armenia once again committed a military provocation, shelling densely populated areas of Azerbaijan along the line of contact, leading to casualties.