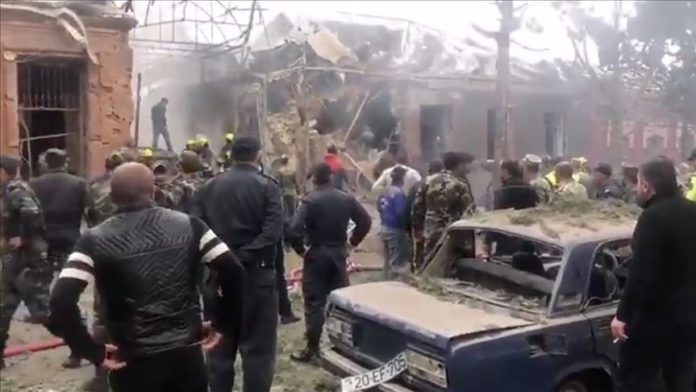 Armenia’s attacks on civilians in Azerbaijani cities are aimed to provoke Baku, a Russian military expert said on Sunday.

“[Armenian Prime Minister Nikol] Pashinyan’s tactics: strikes on Azerbaijani cities to provoke a retaliatory strike in Armenia, and then become a ‘victim of aggression’ in front of Russia and the CSTO [Collective Security Treaty Organization] for help?” Igor Korotchenko, the chief editor of Russia’s National Defense magazine, said on Twitter.

Armenia is a member of a military alliance of six former Soviet states, including Belarus, Kazakhstan, Kyrgyzstan and Tajikistan. Russia also has a military base in Armenia.

Korotchenko, who also heads the World Arms Trade Analysis Center, said strikes must not be carried out against civilians and their property but it is impossible to completely avoid this during military operations.

“But the official declaration of readiness to strike at cities is already crossing the red line,” he said, urging the International Court of Justice to investigate the violations.

He argued that the announcement by Arayik Harutyunyan, the so-called head of the unrecognized “republic” formed in Upper Karabakh, of attacking Azerbaijani cities was tantamount to terrorism.

Considering that the Armenian military formations in Nagorno-Karabakh do not have high-precision weapons, Korotchenko said striking Azerbaijani cities means killing civilians and destroying their houses.

The Armenian Armed Forces have resorted to shelling the densely populated residential areas of Ganja, which has over half a million population, according to the country’s Defense Ministry.

In a statement, it said the armed forces are firing rockets in Fuzuli region from Armenia, and heavy artillery in Aghdam and Terter regions from “occupied territories.”

“As a result of enemy fire, civilians, civilian infrastructure, and ancient historical buildings were harmed.”

The ministry issued another “warning to the enemy,” saying that over the past two days the Azerbaijan army, and human settlements are being subjected to “intensive shelling” from Ballija, north of Khankendi.

“Despite several warnings to the enemy by means of the representatives of international organizations, this is still ongoing. We once again warn the enemy that we will take adequate measures against the enemy positions in Ballija,” it said.

He also shared a video footage of the destruction caused by the attacks.

“Azerbaijan retains its right to take adequate measures against legitimate military targets to defend civilians and enforce Armenia to peace. 4 new missiles just hit Ganja,” he said, adding that the attacks will not intimidate the residents.

“I talked to the people in Ganja. Residents are more than strong. Such irresponsible missile attacks with cluster munitions from Armenia can in no way intimidate them.”

“During recent days, over 10,000 pieces of projectiles and missiles of various types were launched on Azerbaijan’s densely populated settlements. Over 500 private houses were completely destructed or seriously damaged,” he claimed.

The foreign policy chief for Azerbaijan’s Presidency underlined that the “massive bombardment” is “deliberate.”

“The systematic bombardment of residential settlements by Armenia proves that this plan has been prepared preliminarily, and included in combat and firing program of the Armenian armed forces.”

Relations between the two former Soviet republics have been tense since 1991, when the Armenian military captured the region also known as Nagorno-Karabakh. It is an internationally-recognized territory of Azerbaijan.

About 20% of Azerbaijan’s territory, including the Upper Karabakh, has remained under Armenian occupation for nearly three decades.

Multiple UN resolutions, and other international organizations demand the withdrawal of the occupying forces.

During the conflict in the 1990s, over a million Azerbaijanis were internally displaced, while 20,000 got martyred and 50,000 wounded and disabled, according to official figures.

While at least 4,000 Azerbaijanis remain missing, more than 2,000 others were taken hostage by Armenian forces.

Many world powers have urged an immediate halt to the clashes.