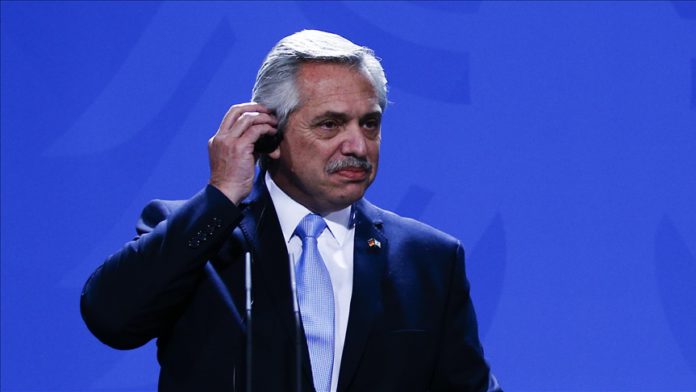 The bilateral meetings are set to focus on trade and international cooperation, according to the local daily Perfil.

Fernandez will depart from Argentina’s capital Buenos Aires on Feb. 1 and meet with Putin on Feb. 3.

The two leaders are expected to share lunch and take part in a joint press conference.

According to Cerruti, Fernandez and Putin will discuss “vaccines, investments, science and other issues of common interest.”

It will be the first face to face meeting between the Russian and Argentine leaders since their phone conversation in November 2021, where they underpinned the wish to meet when the pandemic situation allowed.

Argentina’s leader and his entourage will then travel to Beijing, where they will be based from Feb. 4-6.

The occasion will mark 50 years of diplomatic relations between Argentina and China, which began on Feb. 19, 1972.

In China, Fernandez will hold several meetings, most notably with his counterpart Xi.

According to Foreign Minister Cafiero, both nations are seeking to boost trade.

Xi has also invited Fernandez to attend the opening of the Winter Olympics.

Fernandez will also visit the Museum of the Communist Party of China, Beijing National Stadium, where the Olympic Games are set to be inaugurated, the Great Wall of China, and a campus which is the temporary home for Argentine athletes, according to Telam.

After China, Fernandez will travel to Barbados and hold talks with Prime Minister Mottley.

The visit is expected to last two days and touch on climate change and the Community of Latin American and Caribbean States (CELAC), according to Perfīl. ​​​​​​​​​​​​​​