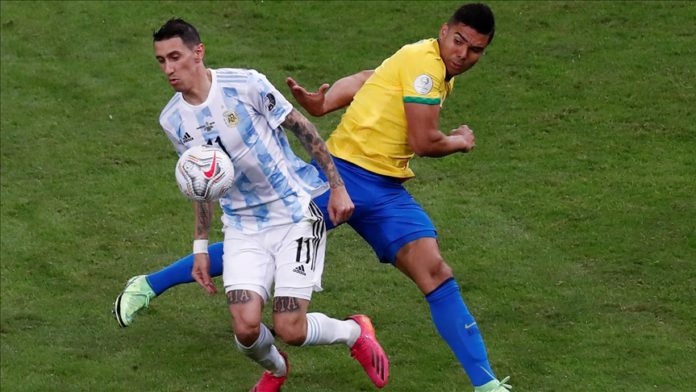 Argentina beat Brazil 1-0 at Maracana Stadium in Brazil on Sunday to become the Copa America champion.

The first few minutes of the match Brazil came close to scoring.

It missed an important chance when Neymar failed to connect in the 13th minute.

Richarlison missed another in the 20th minute.

Argentina shocked Brazil as Angel Di Maria did not miss an opportunity to score with an excellent pass from Rodrigo De Paul and Argentina made it 1-0 in the 21st minute.

Di Maria missed a chance to make it 2-0 as Brazil’s defense blocked his shot in the 29th minute.

The first half ended with Argentina in the lead.

Brazil was more aggressive in the second half.

Their first major attempt against Argentina’s goal failed as Richarlison’s finish did not count as the referee flagged the play for an offside in the 52nd minute.

He missed another chance to equalize two minutes later but could not beat Argentina goalie Emiliano Martínez.

Argentina expected a penalty as Messi fell in the penalty area but the referee dismissed it in the 63ed minute.

Nicolas Otamendi’s hard tackle against Neymar started a tussle and resulted in two yellow cards to Otamendi and Marquinhos in the 81st minute.

Brazil’s numerous attempts were fruitless and the 90 minutes ended 1-0.

He played for Argentina in the 2014 FIFA World Cup final in Maracana Stadium but lost to Germany.

Argentina became champions for the fifteenth time, sharing the record with Uruguay.

Their last Copa America championship was in 1993.

Turkey fights back to draw with Germany in friendly