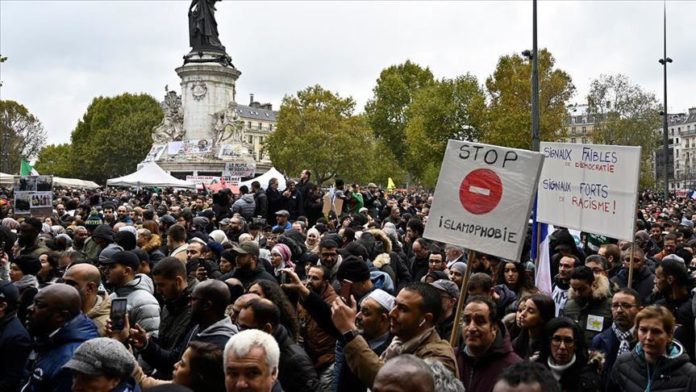 Qatar condemned the rising populist incitement against religions and the deliberate insult of Islam’s Prophet Muhammad.

In a statement, the Qatari Foreign Ministry reiterated its total rejection of all forms of hate speech based on belief, race or religion.

“This agitating populist speech has witnessed a dangerous turning point with the continued institutional and systematic calls to repeat the targeting of nearly two billion Muslims around the world,” the ministry said.

It warned against “deliberately offending the noble prophet, which resulted in an increase in waves of hostility against a basic component of society in different countries of the world”.

The Gulf state called on the international community to stand up to its responsibility to reject hatred and incitement, stressing support for the values of tolerance and coexistence, and working to establish principles of international peace and security.

In Gaza, Muslim Palestinian scholars gathered in front of the French Cultural Center upon the call of the Palestinian Scholars Union to protest anti-Islamic practices and statements of some French officials.

Scholars called for a boycott of French products in response to the recent controversial comments by President Emmanuel Macron, as well as his decision that cartoons of Prophet Muhammad would continue to be published in France.

In Baghdad, Shia groups held demonstrations to protest French provocations against Islam in front of the French Embassy, chanting slogans against Macron.

Besides the provocative cartoons, President Macron earlier this month described Islam as a religion “in crisis” and announced plans for tougher laws to tackle what he called “Islamist separatism” in France.

French Muslims have accused Macron of trying to repress their religion and legitimizing Islamophobia.