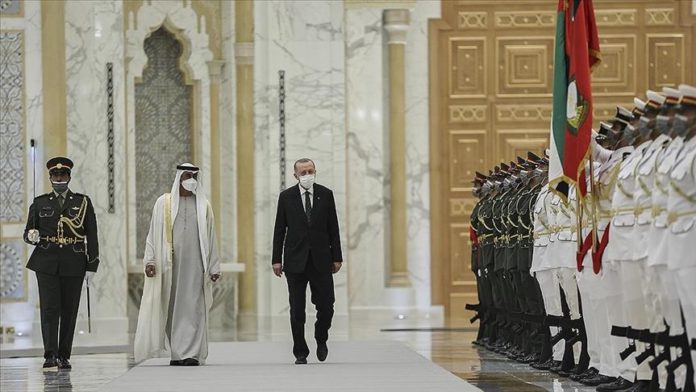 News outlets in the United Arab Emirates (UAE) and other Arab countries welcomed a two-day visit to the Gulf nation by Turkish President Recep Tayyip Erdogan, who returned to Turkiye on Wednesday.

Emirati media in particular widely covered Erdogan’s visit — the first since 2013 — often noting in their reports that Turkiye and the UAE were showing a willingness to help build peace and stability in the region despite the challenges that face them.

“Turkiye and UAE spearhead regional prosperity,” the Arabic-language daily Al-Watan ran as its headlines on a meeting between Erdogan and Sheikh Mohammed bin Rashid Al Maktoum, the Emirati vice president and ruler of Dubai.

The daily stressed that the two countries could serve as a locomotive for regional development with their advanced programs and projects, along with their capabilities in the energy sector.

It noted that Al Maktoum expressed hope that Turkiye and the UAE could lead efforts to bring stability and prosperity to the region.

Another daily newspaper, the Al-Ittihad, reported that the two countries showed strong aspirations to develop bilateral cooperation and partnership.

Turkiye and UAE are prominent and successful regional examples of the peaceful and tolerant co-existence of different groups, said the report.

The vision both countries have embraced is compatible with regional development, it underlined, adding that this would help overcome challenges in the region.

Other major Arab news outlets, including the London-based Asharq Al-Awsat, covered Erdogan’s remarks that Turkiye sees the security of the Gulf states as indispensable to its own security.

Saudi TV channel Al-Arabiya, for its part, drew attention to the dazzling welcoming ceremony that the UAE held for Erdogan’s arrival.

Before departing for the UAE from Ataturk Airport in Istanbul, Erdogan told a news conference that the two countries had launched a new era in their bilateral relations with the visit of Abu Dhabi’s Crown Prince Mohammed bin Zayed Al Nahyan to Ankara in November.

On Sunday, Turkiye’s Communications Directorate announced that bilateral relations between Turkiye and the UAE would be discussed during Erdogan’s visit, along with steps to deepen their cooperation.

Ties between Turkiye and the Arab world are experiencing a major thaw after years of tensions.

The Abu Dhabi crown prince’s visit led to the announcement of a $10 billion fund for investments in Turkiye. Both countries also signed several agreements on energy, the environment, finance, and trade.