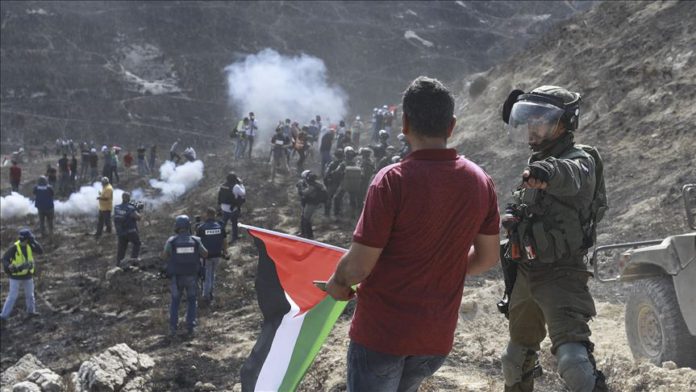 Arab autocratic regimes do not represent their people, experts said Wednesday at an international webinar on the recent normalization of relations between the United Arab Emirates (UAE), Bahrain and Israel.

“These Arab dictators are worried about their power. They want Israel and the US to come and save them [when they are insecure],” said Rabab Abdulhadi, a senior scholar for the Arab and Muslim Ethnicities and Diasporas Studies program at San Francisco State University.

On Sept. 15, the UAE and Bahrain signed US-brokered normalization agreements with Israel at the White House, ignoring objections from Palestinians. These normalization pacts have triggered wide condemnation across the Muslim world.

The conference “Normalization and Resistance: Vision, Strategies and Tactics” to discuss the pacts was hosted by the Istanbul-based Center for Islam and Global Affairs (CIGA) and the South Africa-based Afro-Middle East Centre.

CIGA Director Prof. Sami A. Al-Arian told the conference there are nearly 800,000 Palestinians who are longing to go back to their homes in their native Palestinian lands.

Al-Arian, himself a Palestinian, asserted that the two-state solution “is a misnomer.”

“Israel has rejected the idea from day one,” said Al-Arian, who lived in the US for four decades until 2015 before moving to Turkey.

“This so-called normalization by Arab states with Israel is at the expense of Palestinian rights, and that is what they call ‘the Final Solution,’” he said.

Al-Arian termed the Oslo Accords as a “historic mistake by the Palestinian Authority.”

“Palestine has assumed significance in the Muslim world and in the Middle East because of Israeli hegemony. Israel was created at first at the expense of Palestinian rights.”

Francis Kornegay, senior research fellow at the Institute for Global Dialogue, University of South Africa, said the primary motivation of US President Donald Trump’s administration was its “electoral base, which has basically a Christian evangelical agenda.”

“It is not a normal Jewish lobby but a very strong right-wing evangelical Christian base,” he said, reflecting on how the process of normalization of relations with Israel has affected US-African relations.

“It reflects the major dynamic that has been unfolding in the Middle East political constituency,” he said.

“The pro-Israel constituency [in the US] is on the side of the right[-wing], and the Trump administration is very much tightly aligned with this grouping,” he added.

Arguing that Middle East politics was “dominating US-South Africa relations,” Kornegay said: “The normalization policy is being used to coerce African countries into the Israeli camp but also into a broader anti-Democratic alliance with Egypt, Saudi Arabia and the UAE.”

Reflecting on Turkey’s approach and stance on the Palestinian issue, Gokhan Bozbas from Necmettin Erbakan University in Konya said: “Young cadres from left-wing Turkish parties went to Palestine and fought against the enemy during the 1960s and 70s, and in the post-1980s, Palestine came on the agenda of conservative Islamist parties.”

Abdulhadi from San Francisco University added that Israel was having a “serious, existential crisis.”

“In the presence of the US president’s advisor Jared Kushner and other Zionists, there is no possibility of neutrality and honest brokers,” she said of the normalization deals.

“These deals are a desperate attempt by Israel to break its isolation; it is an illegitimate project, said Abdulhadi.

“None of these Arab governments are democratic, and they do not represent their people,” she said, slamming the discourse that Palestinians are unable to represent themselves.

“It is a longtime colonial discourse,” she added.