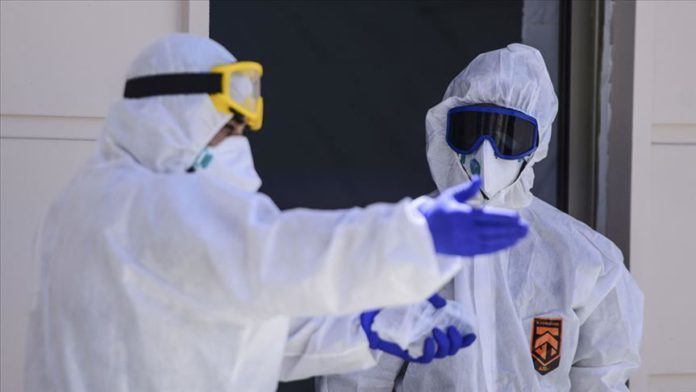 Health authorities in eight Arab and North African countries confirmed more fatalities Monday from the novel coronavirus as the region continues to battle the pandemic.

In Morocco, the death toll from COVID-19 stands at 401 after 19 more people succumbed to the virus in the last 24 hours.

The country reported 659 more cases, bringing the number of infections to 26,196.

A total of 18,968 people have recovered from the virus.

The ministry said the death toll now stands at 65, with the number of confirmed cases totaling 5,062 and 1,837 recoveries.

Libya said three more fatalities pushed the number of deaths to 83, while recoveries rose to 623.

The number of coronavirus cases in the North African country stands at 3,837.

The Kuwaiti Health Ministry said four more deaths and 388 new infections were recorded over the past 24 hours.

To date, 11 people have died from COVID-19, 1,218 people have been infected and 1,131 patients have recovered, the statement added.

The North African country did not report any new deaths from the virus but said four more people had contracted it.

According to a statement, the total number of cases rose to 1,565, and the number of recoveries climbed to 1,225.

At least 244 new cases were reported in Palestine, said a statement by health authorities. The death toll stands at 87.

The number of cases hit 16,024 in the occupied Palestinian lands, including East Jerusalem. A total of 7,191 recoveries were reported.

In the Gulf state, the Health Ministry registered 215 new cases.

According to the Saudi Arabian Health Ministry, 1,258 more infections were registered in the past day and the total number of cases rose to 280,093.

The death toll from the coronavirus has reached 2,949, with 32 additional fatalities, while 242,053 patients have recovered.

The COVID-19 pandemic has claimed nearly 691,000 lives in at least 188 countries and regions since emerging in Wuhan, China last December.

Over 18.16 million cases have been reported worldwide, with the US, Brazil, India and Russia currently the hardest-hit countries, according to figures compiled by US-based Johns Hopkins University.

The data shows more than half of all patients – over 10.76 million – have recovered so far.

*Writing by Burak Bir in Ankara