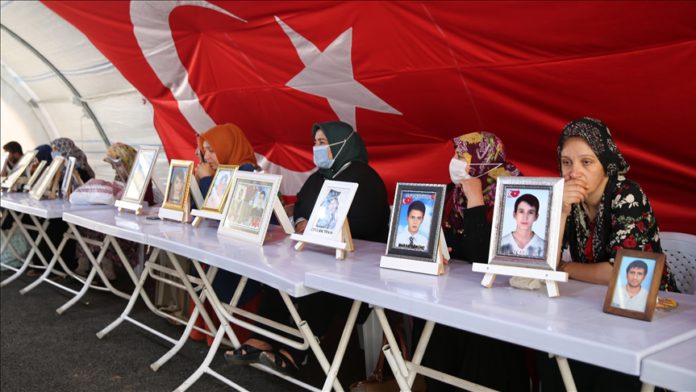 Families in Turkey whose children have been abducted or forcibly recruited by the PKK terrorist organization continued their sit-in in the southeastern Diyarbakir province.

The families have been protesting since Sept. 3, 2019, for 680 days, encouraging their children to give up their weapons and surrender to Turkish authorities.

Protests outside the office of the opposition Peoples’ Democratic Party (HDP) in Diyarbakir started with three mothers who said their children had been forcibly recruited by the terrorists. The Turkish government says the HDP has links to the PKK terrorist organization.

Aydan Arslan, one of the protesting mothers, said she wants to reunite with her daughter Aysun who was abducted seven years ago.

“They kidnapped my child. I want my child back from HDP. I will not give up on my child,” said Arslan, calling on her daughter to surrender to the security forces.

Arslan said she will continue the protest until she reunites with her daughter.

Nazmi Turan, a father at the sit-in, said he has not heard from his daughter Kadriye for eight years after she was abducted by the terror group in the Cukurca district of the southeastern Hakkari province at the age of 15.

“We are determined. I want my daughter back from HDP. Bring my child back”, Turan said and called on her daughter to escape from the terror group and surrender to the security forces.