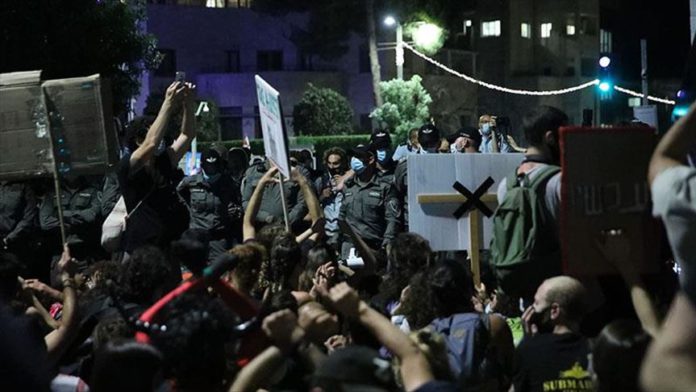 Thousands of Israelis demonstrated against Netanyahu’s government on Saturday, with several protesters arrested by police.

Speaking to the Kan Public Broadcaster, Ohana considered the closing of the roads as “a form of violence”. “I am worried by the hate in the air,” he said.

Protesters are demanding the resignation of Netanyahu over his corruption cases and deterioration of the country’s economic conditions in the light of coronavirus pandemic.

In West Jerusalem, Israeli police arrested a suspect accused of attacking a protester with a glass bottle, while in another incident, clash between protesters and counter-protesters led to the injury of a man after being stabbed, according to the Times of Israel newspaper.

Other Israeli officials also condemned dealing harshly with the protesters, including Netanyahu’s partner in the government and Defense Minister Benny Gantz.

The anti-Netanyahu protests erupted two months ago and intensified in recent weeks demanding his resignation over bribery accusations, breach of trust and three other corruption cases.