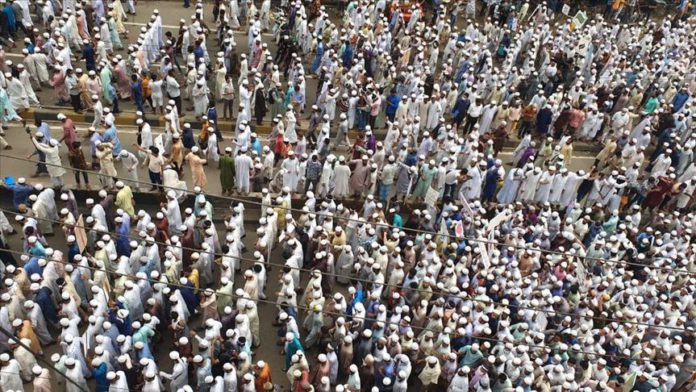 Tens of thousands of people gathered in Bangladesh’s capital Dhaka on Monday to protest against anti-Islamic acts in France, including display of blasphemous caricatures.

The protesters gathered outside the Baitul Mukarram National Mosque chanting slogans against France.

The protest rally, organized by Hifazat-e-Islam, one of the largest Islamic non-political groups, marched on the city streets and headed towards the French Embassy in Dhaka. However, security forces barred the protesters from reaching the embassy.

Al Amin, a grade-9 Madrasha student in Rampura area of capital Dhaka, joined the rally along with some of his fellow students to show his anger over the publication of caricatures in France insulting the Prophet Muhammad.

“I join the rally as I feel hurt over the publication of the caricatures […] We strongly denounce France’s anti-Islamic actions based on hatred,” he told Anadolu Agency.

Junayed Babunagari, leader of Hefazat-e-Islam, urged businesses in Bangladesh not to buy and sell French products to counter the Islamophobic acts. He also urged the government to pass a “condemnation motion in parliament” and cut diplomatic ties with France.

Earlier on Sunday, the opposition Bangladesh Nationalist Party expressed solidarity with the ongoing protest, saying insulting any religious leader in the name of freedom of expression cannot be justified in any way.

The Bangladesh government, however, is yet to make any official comment over the matter.

Earlier last month, Macron described Islam as “a religion in crisis” and announced plans for tougher laws to tackle “Islamist separatism” in France.