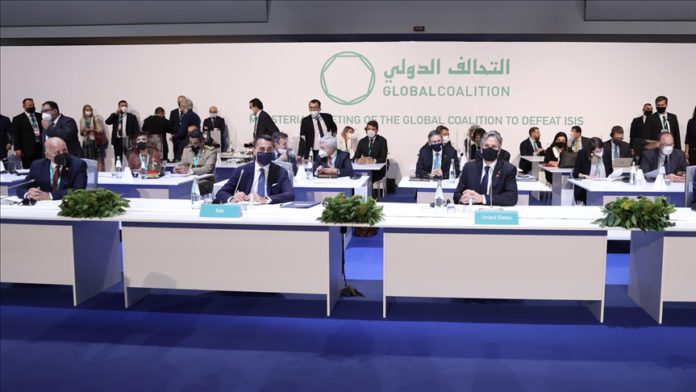 Ministers of the Global Coalition to Defeat Daesh/ISIS reaffirmed their shared determination Monday to continue the fight against the terror group.

The ministers, who reconvened in-person after two years at the invitation of  Italian Foreign Minister Luigi Di Maio and US Secretary of State Antony Blinken, issued a joint communique through which they reiterated their commitment to create conditions for the enduring defeat of the terrorist group through a comprehensive, coordinated and multifaceted effort

The Central African Republic, Democratic Republic of Congo, Mauritania and Yemen were welcomed as new members of the coalition, the communique noted.

Emphasizing the protection of civilians as a priority and affirming that international law must be upheld under all circumstances, the ministers underlined that cooperation across all coalition lines of effort should be strengthened to prevent the terror group’s core in Syria and Iraq and its affiliates and networks around the world from reconstituting in any territorial enclave.

“Daesh/ISIS no longer controls territory and nearly eight million people have been freed from its control in Iraq and Syria, but the threat remains. The resumption of Daesh/ISIS activities and its ability to rebuild its networks and capabilities to target security forces and civilians in areas where the coalition is not active requires strong vigilance and coordinated action,” the ministers said.

Praising Iraq’s efforts to counter the terror group’s remnants and prevent its resurgence and the increased capacity of the Iraqi forces combatting Daesh/ISIS, the ministers, however, highlighted the importance of coordinated efforts in the struggle against the terror group.

“The coalition operates in Iraq at the request of the government of Iraq in full respect of Iraq’s unity, sovereignty and territorial integrity and to the benefit of the Iraqi people.

“The ministers firmly condemn the continuing attacks against coalition personnel and convoys and diplomatic facilities, emphasizing the importance of the government of Iraq in protecting coalition assets,” the ministers said.

The ministers reiterated that they stand with the Syrian people for a lasting political settlement in accordance with UN Security Council Resolution 2254.

“The coalition continues to support inclusive local recovery and stabilization in areas liberated from Daesh/ISIS and reconciliation and reintegration efforts to foster conditions conducive to a Syria-wide political resolution to the conflict under the parameters of UN Security Council Resolution 2254,” the ministers maintained.

The ministers drew attention to growing presence of Daesh/ISIS affiliates and networks in sub-Saharan Africa which threaten security and stability, particularly in the Sahel Region, East Africa and Mozambique and remarked that reinforcing civilian state institutions and consolidating the rule of law, including law enforcement capacity, are of utmost importance in the struggle against the terror group.

Recognizing the challenge posed by foreign Daesh/ISIS terrorists who are in custody, as well as their family members who remain in Syria and Iraq, the ministers reiterated that they committed to pursuing existing effective justice and accountability mechanisms in close coordination with the terrorists’ origin countries.

“The coalition reaffirmed its belief that a comprehensive and collective effort remains necessary to achieve a full and enduring defeat of Daesh/ISIS worldwide. The Global Coalition to Defeat Daesh/ISIS has proven that it is a cohesive, responsive tool that has achieved notable successes through military, political, stabilization, counter-messaging, financial and law enforcement lines of effort,” the ministers concluded.