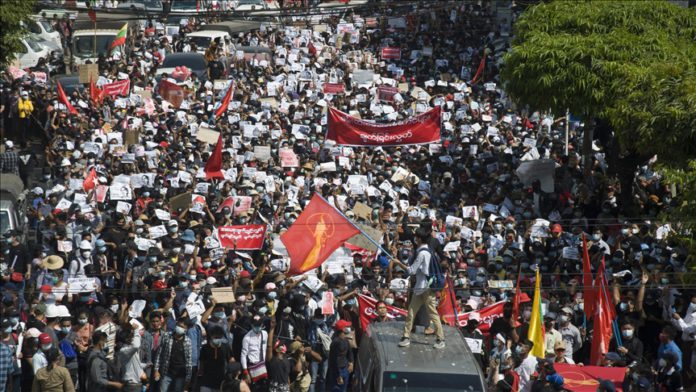 Protests in Myanmar against military rule continued for the third consecutive day on Monday as demonstrators called for a nationwide general strike.

Government offices in the capital Nay Pyi Taw presented a deserted look as most staffers joined the mass strike.

Aung Htet, a journalist, based in the capital, said he saw only a few buses and commuters on the streets in the morning, an unusual sight.

A picture of an empty building of the Education Ministry also went viral on social media. Besides, public servants in many government departments posted images supporting the civil disobedience campaign.

Suu Kyi served as the late counselor of Myanmar from 2016 to 2021, following a long struggle for democracy in the nation that earned her the Nobel Peace Prize in 1991. But her silence over the massacre of Rohingya Muslims and defense of the military’s genocide at the international court drew harsh criticism across the globe.

The coup took place hours before the first session of the country’s new parliament was set to convene following elections last November in which Suu Kyi’s NLD party made sweeping gains. The military claimed the coup was staged due to “election fraud” in the polls.

Thousands of demonstrators protested against the coup, chanted slogans, and displayed anti-coup placards. They were held back by police through water cannons.

Protest rallies were also taken out in other parts, including the major jade mining region in northern Kachin state and the southernmost border town of Myeik.

In Yangon, police stopped demonstrators in the densely populated township of Hlaing Thar Yar from marching to the city center as they closed a connecting bridge from both sides.

Wai Yan Phyo Moe, a university student and vice-president of the All Burmese Federation of Student Unions, told Anadolu Agency that it is no longer a strike, but an “uprising against the dictatorship.”

Activists and ousted government leaders have been calling on the people to join the general strike, while health workers are already leading a civil disobedience movement against the military coup.

Meanwhile, arrests of former officials and activists continued. Myint Naing, the erstwhile chief minister of the central Sagaing region, and Nang Khin Htwe Myint, who headed the government of Kayin state, were put under house arrest in Monywa and Hpa-An, their respective state capitals.