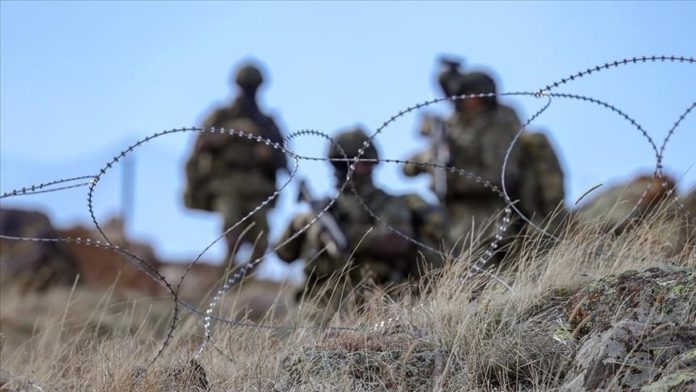 One more PKK terrorist surrendered to security forces in Turkiye as a result of persuasion efforts, the Interior Ministry announced on Wednesday.

In a statement, the ministry said the terrorist joined the PKK terror group in 2019, and was active in Syria.

With the latest additions, four terrorists have laid down their arms through persuasion efforts this year, it added.

In Turkiye, offenders linked to terrorist groups who surrender are eligible for possible sentence reductions under a repentance law.

According to Turkish officials, in recent years the terrorist PKK — battered and demoralized by Turkish security forces’ successful operations — has been losing members and failing to attract new ones.

Turkiye has carried out a series of offensives since 2019 against terrorist groups in northern Iraq, particularly the PKK. The latest operations, Pence-Simsek and Pence-Yildirim, were launched this April in the Metina and Avasin-Basyan regions.

Also, since 2016, Ankara has launched a trio of successful anti-terror operations across its border in northern Syria to prevent the formation of a terror corridor and enable the peaceful settlement of residents: Euphrates Shield (2016), Olive Branch (2018) and Peace Spring (2019).

In its more than 35-year terror campaign against Turkiye, the PKK — listed as a terrorist organization by Turkiye, the US and EU — has been responsible for the deaths of at least 40,000 people, including women, children, and infants.