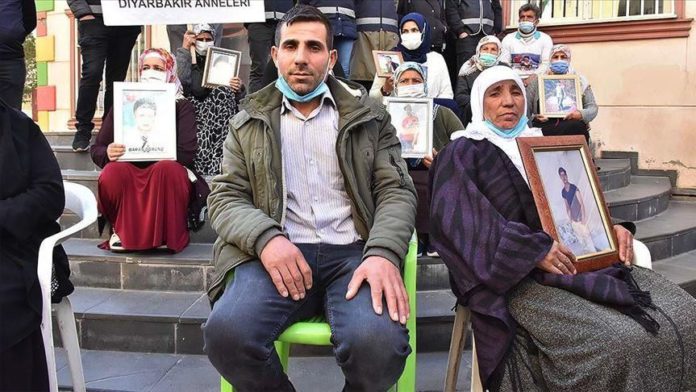 Another family on Thursday joined the ongoing sit-in protest against the PKK terror group in Turkey’s southeastern Diyarbakir province, demanding the return of their abducted son.

The protest began on Sept. 3, 2019 in the city of Diyarbakir, when three mothers said their children had been forcibly recruited by YPG/PKK terrorists. The sit-in outside the office of the Peoples’ Democratic Party (HDP) — which the government accuses of having links to the terrorist YPG/PKK — has been growing every day.

Fehime Tutmus, whose son was abducted by the terror group six years ago when he was 22 years old, joined the sit-in protest on its 444th day.

Tutmus, who came from the eastern province of Bitlis to join the protest, said: “They deceived my son, the Peoples’ Democratic Party took away my son.”

“I saw that children of some protesting families are returning. I cry day and night,” she added.

Sedrettin Tutmus, brother of Abdurrahim, said he would not leave the protest until he got back his brother.

He called on his brother to surrender to the security forces.