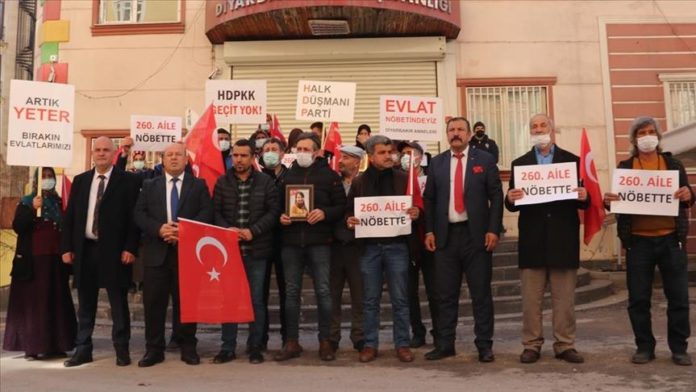 Another family joined the sit-in protest, now in its 891st day in southeastern Diyarbakir province against the PKK, in hopes of being reunited with their beloved who was abducted by the terror group.

Remzi Celik joined the protest because of his sister, Rujbin, who was forcibly recruited by the PKK in 2015 when she was studying at Dicle University.

“My sister would get graduated and become a teacher, a helpful child of this country,” he said. “My father got a heart attack from sadness and passed away.”

Celik said he would take part in the protest until Rujbin is returned, and he urged her to flee the terror group and surrender to security forces.

Since Sept. 3, 2019, families have camped for 885 days outside the Diyarbakir offices of the Peoples’ Democratic Party (HDP). The Turkish government said the party has links to the PKK.

Demonstrations have since spread to other provinces, including Van, Mus, Sirnak and Hakkari.

In its more than 35-year terror campaign against Turkiye, the PKK — listed as a terrorist organization by Turkiye, the US, and EU — has been responsible for the deaths of more than 40,000 people, including women, children and infants.

State prosecutors have filed a case with Turkiye’s top court to close the HDP because of its reported terrorism ties.​​​​​​​